On World Press Freedom Day of May 3, the international watchdog group Reporters Without Borders (RSF) has released its 2020 World Press Freedom Index. Unsurprisingly, the Middle East and North Africa scored worse than any other part of the world, reflecting the authoritarian rule pervading this region.

The Index measures the degree of freedom available to media workers during 2019 in 180 countries, using expert surveys and quantitative data to capture seven dimensions:

Each country is ranked, from 1 to 180 (1 being the best), based on a composite score of these dimensions.

In this year’s Index, Norway is ranked as the freest press environment in the world. North Korea comes in last. (The United States ranked 45th.)

Just two MENA (Middle East – North Africa) countries made it into the top half of the Index. Tunisia, the sole Arab democracy, is the region’s bright spot in 72nd place. Israel scored 16 points worse than Tunisia, coming in 88th in the world.

From here, there is a steep drop to get to the next six MENA countries listed in the rankings, plus the Palestinian Territories and Turkey:

Sadly, eight MENA nations rank among the 20 worst in the Index; indeed, MENA is more heavily represented at the bottom of the list than any other region. Four of these MENA countries—Libya, Iraq, Syria, and Yemen—are embroiled in civil war or violent conflict, which would explain, in part, their abysmal rankings. But the other four—Egypt, Bahrain, Iran, and Saudi Arabia—are comparatively stable, making their very poor scores even more striking.

Particularly dismal are the “abuse scores” given to several MENA countries. This score measures the intensity of violence, imprisonment, and other abuse against media actors in the country, with 100 being the most dangerous environment. The MENA countries with the worst abuse scores in this year’s Index are:

All the negative trends captured in the 2019 Index look set to continue or even worsen in 2020. The COVID-19 emergency has given MENA regimes another excuse to suppress legitimate reporting, opinion, and other media. Since March, journalists, bloggers, and other media figures have been detained or otherwise punished in Algeria, Egypt, Iraq, Turkey, and even Tunisia for criticizing their governments’ responses to the pandemic. While some of this repression may abate once the coronavirus is contained, we should expect most MENA governments to continue to thwart, stifle, and punish free speech.

Amy Hawthorne is POMED’s Deputy Director for Research. She is on Twitter as @awhawth. 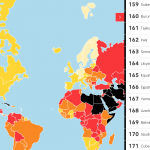 Egypt: One of the world’s biggest jailers of journalistsNews & Reports 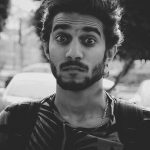