An Egyptian Coptic rights activist is facing charges of joining a “terror” group and spreading misinformation, his lawyer confirmed Monday, amid a renewed crackdown on dissidents in the country.

He said Kamel was questioned by state security prosecution until 10 pm (2000 GMT) and that his lawyers only managed to see him for the first time on Sunday.

Kamel was set to be kept in temporary custody at Tora prison in southeast Cairo for 15 days, with further questioning scheduled for later this month.

The vocal activist is a leading member of the Maspero Youth Union, a Coptic human rights organisation born in the wake of the January 2011 protests that toppled longtime ruler Hosni Mubarak.

Coptic Christians, the largest non-Muslim religious minority in the Middle East, make up about 10-15 percent of Egypt’s predominantly Sunni Muslim population of 100 million and have long faced sectarian discrimination.

In recent years, the community has been targeted by a series of militant attacks, including by the Islamic State group.

“Release Ramy Kamel… you have no proof that Ramy broke the law,” he said on his Facebook page.

Several activists noted online that Kamel had been sharing footage of sectarian violence in southern Egypt on social media, eliciting a warning from authorities.

Copts are routinely forcibly evicted from their homes by their Muslim neighbours in southern Egypt, often with the authorities’ tacit approval.

“USCIRF is deeply alarmed by (the) arrest of Coptic activist Ramy Kamel,” said a post on the government body’s Twitter.

“Egypt must… fulfil its claims of reform and steps toward religious freedom,” it added, also criticising an “apparent renewed crackdown on activists and journalists” in the country.

Egypt police on Sunday raided, detained then released three editors at local news outlet Mada Masr after arresting another editor the day before. 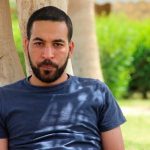