By Jonathan Adly – History of the Copts Podcast 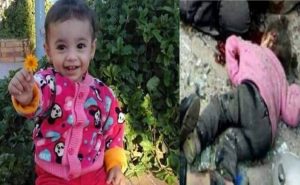 This is the transcript of a talk that was given at the Modern Coptic Martyrs Remembrance Day in Washington, DC, October 3, 2018

Before I start, let me express my thanks and gratitude for being invited to talk with such distinguished speakers and in front of you.  An honor, which truly I don’t deserve.

I am here not as an expert to tell you about some hard statistics or count the truly countless persecution events against the Copts. I suspect many of you have heard them before, or at the very least, you have a general idea about what the Copts are facing today. I am here to simply speak to you as a father, about his daughter.

I have a daughter; her name is Joy, a vibrant, active 2 years old who is full of life. She woke me up this morning to say  “Good morning Daddy” before going to her daycare.

This is Lucinda (picture above), just like Joy she was a vibrant active 2 years old who filled the life of her family with happiness and joy.

A little more than a year ago on Palm Sunday, she woke up very excited.

You see, Palm Sunday is a big deal, especially if you are two.

You get to wear your best cloth; you get to see all your friends at church, and above all you get to have all kinds of exciting toys made of palm trees.

You can get a cross, a donkey, and if you are lucky, you can even get a crown.

On that day, Lucinda went to Church just as Joy did. Joy got to go back and play with all her toys, but Lucinda never did.

I am sorry about the graphic images, I wish I could speak about Coptic Martyrs as some distant object to be analyzed and then hope and pray for them but I just can’t. I am a father, and just like Joy, Lucinda is my daughter.

Not in the strict meaning of the word of course, but in every other sense.

Lucinda was a victim of the Palm Sunday bombing in Alexandria. She was one of about 45 other innocent victims, A few months before them, 10 year old Maggie was a victim of another Church bombing with 28 victims. The list would literary go on forever. I am not here to list all the Martyrs or even mourn their memories; after all, they are with the heavenly Father. I am here; to do my best to make sure no such tragedy ever happens again. To use whatever gifts that the Almighty God has given me to make this World a just and a moral place.

Where we stand today was built on the shoulders of a group of extraordinary men who founded this great Country. They told the world how governments ought to be; They said that  all men are created equal, that they are endowed by their Creator with certain unalienable Rights, that among these are Life, Liberty and the pursuit of Happiness. — That to secure these rights, Governments are instituted among Men.

Let me repeat the words of the Declaration of independence, the primary function of any government is to protect the Life, Liberty, and the pursuit of Happiness of its citizens.

That is my perspective as a Coptic-American who is truly inspired by this Country, yet still, wants to advocate for and protect my family in Egypt.

By this standard, the situation of the Copts in Egypt leaves a lot to be desired and it is both our duty and right to bring light to these issues and do our best to improve them.

A different perspective might be the biblical command, Fear God, and Honor the King.

Another one might be, Egypt is best left to those who live in Egypt, and any advocacy is going to do more harm than good.

Of course, we can fundamentally disagree with both perspectives – After all, El Sisi is not a divine monarch, and international norms in respect to human rights are the crowning achievement of the modern era.

But,  we should see where they are coming from and personally, I would never directly or indirectly attack fellow Copts for following their values.

Facts, persuasion, and talking to each other respectfully, in my humble opinion is the way to go. We must, and I repeat must, build each other up, not tear down.

So what do you do when you disagree and want the international community and fellow Copts to see things as they are in Egypt? Well, I believe that we should present the facts as they are and make a persuasive case for what should be done – Respectfully, and to build up. Both the Coptic Community and Egypt as a whole.

So here are some basic facts:

What I am respectfully calling for is, for Egypt with the encouragement of the international community and the support of the Copts as a whole, is the following:

To end, I would like to quote a historical exchange that happened close to a 100 years ago in the events leading up to the only Coptic Congress in Asyut in March, 1911.

Pope Cyril the 5th sent a telegram to the Bishop of Asyut saying:

“Whilst it gives us pleasure to see that a number of Copts have agreed to work together for the welfare of the community at large, we would ask our beloved children to refrain from building up a huge gathering in Asyut, which could result in agitation and render them liable to criticism. We would therefore urge everybody to exercise extreme prudence, wisdom and circumspection.”

To which, Bishop Macarius of Asyut replied to by saying:

“With all respect and obedience to Your Holiness, “I would assure you that there is no cause for concern. No personal or public damage is likely to result, the main objective of the Congress being the forging of stronger ties among all Egyptians through the safeguarding of the legitimate rights of Copts. I do not feel the slightest apprehension of its being held in Asyut.”

Like bishop Macarius, I would like to assure all those attending in person and through social media. With all respect and obedience, I am here to speak for Lucinda, to safeguard the legitimate rights of the Copts,  rights that are given to them by the Creator, not by a man-made government. Rights, that no public or personal damage could ever result for advocating for them. Rights, that if left neglected, will soon be forgotten.

Thank you for your time, and please keep the parents of Lucinda in your prayers.