During a September 6 interview on Egypt’s Sada Al-Balad TV network, Egyptian author Tarek Heggy said that women and religious “others,” like Christian Egyptians, are the “thermometers” by which the progress of Egyptian society is gauged. He said that society is moving forward when they have equal rights, and that they should be treated equally because the Egyptian constitution says so, rather than out of pity. Heggy criticized the attacks against Christians in the Al-Minya Governorate, as well as the slow pace at which reforms regarding Christian Egyptians are taking place because of opposition from “people within the system.”

Tarek Heggy: I believe that in societies like ours, two things serve as a thermometer, which you put in a sick man’s mouth in order to gauge his temperature. These two things are the status of women and status of the religious “other.”

Interviewer: The religious “other”?

Interviewer: As if you are doing them a favor…

Tarek Heggy: Exactly. We should not treat them [equally] because our religion says so, or because we are good people. No! We should do it because the constitution stipulates that they are Egyptian citizens.

Let’s not fool ourselves – the Christian Egyptian suffers from many things. He suffers as soon as he opens his mouth and he tells people his name. What is going on in the Al-Minya Governorate is a horrible crime. In my opinion, it merits the intervention of the president, and the holding of the governor accountable. Why do these clashes always happen in Al-Minya? We know which leading figure in the Muslim Brotherhood is influential there. We know his name. He resides in Qatar… It is inconceivable that if your name is Yousuf Mikhail, for example, you will face problems on a daily basis. And let’s not kid ourselves and say that only a few are persecuting them. No. There are problems. These problems range from being deprived of employment opportunities, to being prevented from obtaining your rights, or to being attacked in Al-Minya. We can talk about the legalization of [unauthorized] churches. The president has said they would do so.

Interviewer: He formed a committee…

Tarek Heggy: That’s right. But those in charge of implementing [its recommendations] have done very little. As I wrote in an article, if we continue at this pace, it will take us 17 years. This means that people within the system are opposing it. 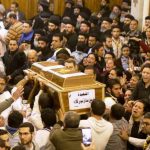