A Coptic Christian from Beni Suef governorate in Egypt saw his wheat fields set on fire, just four days after he was accused of planning to turn his house into a church.

On 2 June, Ibrahim Sadeq Ayad from Ezbed Ragy village, near the city of El-Fashn, informed the police that his 2.5 acres of land had been torched by unknown assailants, World Watch Monitor was told by the lawyer who accompanied him to the police station.

Three days prior to the incident, Ayad was at the same police station but in a different position. According to his lawyer, Bassem Farid, a report had been filed against him, accusing him of turning his home into a church.

As there is no church in the village, Ayad has hosted a Sunday school at his home for the past four years, led by church ministers from El-Fashn.

On 29 May, Ayad had a visitor from the neighbouring village of Ezbet Marco: the pastor of St. Mary and St. Michael’s Church, Fr. Eshaq Kastour, who had come to pray for Ayad’s sick wife, at his invitation.

“When the Muslim villagers of Ezbet Ragy saw the priest visit Ibrahim’s home, they concluded that his home would turn into a church,” Farid said. Then they filed a complaint with the police against him and Ayad was arrested.

Three days later, the Coptic man was released after signing a pledge that he would not turn his home into a church and that no prayer meetings for children would be held there again.

The next day his land was burnt and his lawyer implied a link between that incident and his release. No arrests have been made in relation to the burning of the land so far.

As there is no formal church in Ezbed Ragy, local Coptic Christians used to go to the church of St. Mary and St. Michael in the neighbouring village of Ezbat Marco, which is 8km away. But in October 2012, they were attacked by some local Muslims who protested against their regular visits. Since that time, they have been going to church in El-Fashn, which is twice as far from home. 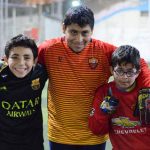 Egyptian Cleric Sheikh Sharif Abadi: The Armenian Genocide Is a Lie Fabricated by the British, the Muslims Never Perpetrated a Racial MassacreNews & Reports