Ms Magdy said, as she posed her question on the reason behind the attack: “I can’t imagine or grasp what happened! We have heard about attacks by terrorists against the military and police, and it came under the pretext of an ‘exchange of violence’; also of attacks against Copts and their churches, and we considered it directed at non-Muslims, the followers of another religion and seen as their enemies. But [now they attack] Muslims! how could they?!” The remark brought Ms Magdy under fire; it was generally seen as an unacceptable slur against Copts.

Accordingly, Muhammad Abul-Enein, owner and head of Sada al-Balad channel, referred Ms Magdy to questioning, and dismissed her from her role as talk show host. Whether the dismissal is temporary or final will be decided basing on the questioning.

in a statement, Mr Abul-Enein said: “The Egyptian people stand united behind our brave armed forces and heroic police … In Egypt, we all are one people—no difference between Muslims and Christians. We are all equal and live together in peace. Terrorism or aggression against peaceful individuals is a criminal action not only in Egypt but in the whole world.”

It was not the first time for Rasha Magdy to express hostility against Copts. The first time was on 9 October 2011 during what has come to be known as the ‘Maspero Massacre’. That day, a peaceful demonstration by Copts, protesting the burning by Islamists of a church in Aswan and the official nonchalance at the incident, was attacked by military armoured trucks at Maspero on the Nile Corniche in Cairo. Twenty-seven Copts were crushed or shot to their death and some 330 were injured. The army insisted it had not attacked the Copts and that outside parties were involved, but no investigation has so far been made public.
Read more at http://en.wataninet.com/coptic-affairs-coptic-affairs/sectarian/remembering-maspero/1191/

Rasha Magdy did not merely read the news on the strip that appeared on the TV screen, but went on, vociferously and heatedly, to add personal comments which incited against Copts, and did not conform with balanced, impartial news reading. Neither were they in line with the vigilance for public interest expected of her as a news presenter, nor the required awareness of the limitations of her position or her influence on viewers. 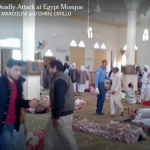 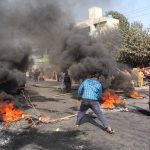