Attack on Christians in Egypt raises many questions Twenty-nine pilgrims on their way to the Saint Samuel Monastery in Upper Egypt, including many children, were killed and thirty others wounded in an attack claimed by ISIS. Islamic extremism is spreading in this poor region abandoned by the public authorities.

The village of Nazlet Hanna, less than 200 kilometers south of Cairo, mourns its dead. In a little room, Coptic women dressed in black are grieving.

Seven inhabitants of the village were murdered and five wounded on Friday morning, when armed men gunned down Christians belonging to the Coptic Orthodox Church in an attack claimed by Islamic State (ISIS).

A crowd gathers around a woman who stumbles. People hold her to prevent her from falling.

Safa saw her son killed before her very eyes. She, too, was on the bus on Friday that was carrying pilgrims to the Saint Samuel Monastery, an hour and fifteen minutes from her home, when masked men opened fire on their vehicle in the middle of the desert.

“First they killed the people outside the bus, then they came into it. My son Bishoy tried to protect his little seven-year-old sister and me with his body. He told them ‘Stop shooting! You’re killing us because we are Christians’. He received a bullet in his neck and his heart.”

Safa, her eyes blank, does not seem to be speaking to anyone in particular.

“Then they said they would burn our bus, but another vehicle drove up and they went to attack it,” she adds, pounding her chest and face with her powerless hands.“Stop behaving like that,” a young man who lost his brother in the attack tells her. “We have to be proud of our martyrs. They refused to abandon their faith.”

Witnesses said the assailants demanded that the Copts go the monastery, abandon their faith and make a profession of faith to Islam.

The attackers killed anyone who refused to do so on the spot, along with many children. They reportedly gave the survivors booklets containing verses of the Koran. A total of 29 people from different villages died in the attacks and about 30 were wounded.

In retaliation, the army bombarded Al Qaeda training camps in Darna, in Libya, in which Cairo claims the attackers were trained. However, it was ISIS that claimed responsibility for Friday morning’s attack.

In the village of Nazlet Hanna, few if any are convinced by the reaction of the Egyptian authorities. Safa is certain that she recognized the attackers’ Egyptian accent when they said: “We’re going to kill you sons of dogs!”

This attack raises many questions. Was it perpetrated by a dormant local cell that was reactivated? Or was it the work of a group that found support abroad? There is no immediate response to these questions, especially since the perpetrators fled after the attack.

In Upper Egypt, where two-thirds of the country’s Copts live, violence against Christians is nothing new. The way this last attack was carried out is in line with past practice, says researcher Gaetan du Roy, a specialist on the Copts.

“This shooting recalls the methods of Jamaa Al-Islamiya in the 1990s, which also tried to jeopardize the government by attacking Christians. Such violence was also accompanied by attacks against tourists.”

In recent months, attacks against Copts, who reportedly represent 8% to 10% of the Egyptian population, have become more frequent, especially around religious holidays: just before Christmas in Cairo, then on the 9th of April last in Alexandria and Tanta during the celebration of Palm Sunday.

For Miled Salama, a young attorney residing in Nazlet Hanna, extremism is spreading in the region. “People do not hesitate to express their extremist ideas in public,” he says. “After the April 9 attacks, a young man said in a café: ‘These attacks have no importance. They only targeted Christians.’ No one said a word!”

Upper Egypt, a poor region abandoned by the public authorities, is a fertile breeding ground for sectarian violence.

Du Roy traces it back to President Anwar Sadat’s opening up of the economy in the 1970’s.

The State then “pulled out of social assistance and was replaced by religious organizations”, particularly Salafist movements in rural areas, he says.

Photo credit:Relatives and friends of the victims of the attacks take part in their funerals at the Saint Samuel monastery. / Ibrahim Ezzat/NurPhoto 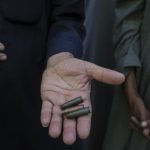 The Coptic martyrs of Minya: poignant accounts of their final momentsNews & Reports 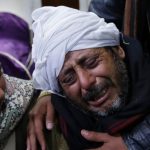