Egyptian Copts have welcomed Pope Francis’ “insistence” that his visit to Cairo this week go ahead despite the recent attacks on two churches that killed 45 worshippers.

The head of the Catholic Church will arrive in Cairo on Friday and visit President Abdel Fattah el-Sisi, the Grand Imam of Al-Azhar University Sheikh Ahmed el-Tayyib, and Coptic Pope Tawadros II, and celebrate Mass in a stadium with an estimated 25,000 Coptic Catholics. He will give a speech at a peace conference organised by Al-Azhar, the seat of Sunni learning.

He will also join with Pope Tawadros and other Christian leaders in honouring the victims of the recent attacks, praying silently in front of a blood-stained wall of St Peter and St Paul’s church in Cairo where 29 people were killed in a suicide attack in December.

Francis will travel around in a closed car during his visit but not an armoured one, the Vatican said on Monday.

In a video message released in Italian and Arabic the Pope said: “I would like this visit to be a witness of my affection, comfort and encouragement for all the Christians of the Middle East, a message of friendship and respect for all the inhabitants of Egypt and the region, and a message of brotherhood and reconciliation with all the children of Abraham, particularly the Muslim world, in which Egypt holds so important a place.”

One aim of the visit, which is subtitled “A pope of peace for an Egypt of peace”, is to improve relations with Al-Azhar, which in 2011 broke off ties with the Vatican after Francis’ predecessor Benedict XVI called for better  protection for Copts, following a bombing of an church in Alexandria in which 23 people were killed.

The two-day visit comes at a time of high anxiety among Copts, who make up around 10 per cent of the population, following the two suicide bomb attacks on Palm Sunday, one of which apparently targeted the Coptic pope. In response, clergy in the southern Coptic heartland of Minya scaled back Easter celebrations in many churches. Meanwhile hundreds of Coptic families have fled northern Sinai after Islamic State threatened to expand its activities and claimed responsibility for a number of murders of Copts and attacks on churches there.

Some Copts were scared to speak to the press and others said they will stay at home rather than attend a papal event that could be targeted, even though levels of security will be high throughout the visit. Amir Fakhry, a Coptic activist in Minya Governorate, said he praised Pope Francis’ “keenness not to change the timing of his visit”. He named the Muslim Brotherhood as first among the “terrorist organisations and groups” that had tried but “failed to distort the image of Egypt externally”.

Mr Fakhry said he hoped Pope Francis would raise with President Sisi the treatment of Copts in Minya, where he said they had been “continuously” attacked and had no rights. In many villages “Christians are without churches and have difficulties in finding a place to worship,” he added.

An American missionary priest who worked in Egypt for two decades, Fr Douglas May, told the US-based Catholic News Service that while Egyptian Christians’ problems stem from “several sources,” many Copts feel “the voice from al-Azhar is not strong enough against all this fanaticism and it may even be affirming it.” Amid the country’s economic difficulties and high unemployment, minorities are an easy target as “someone to blame,” he added.

Fr Stephanos Samy, a priest at Mar Girgis (St. George) Cathedral in Tanta, one of the two attacked on Palm Sunday, told World Watch Monitor that in continuing with the visit, Francis was refusing to “[submit] to terrorism”.

Fr. Antonios Mounir, of St Peter and St Paul’s church in Cairo, said he believed Francis was coming “to support the Egyptian people in this crisis .”

The Egyptian government has however sought to depict the incidents as violence inflicted on moderates by foreign-influenced extremists rather than on Christians by some Muslims. This view was echoed by Fr. Mikhail Anton, a priest at Mar Girgis church in El-Arish, from where hundreds of Coptic families have recently fled following threats from IS.

Fr. Anton told World Watch Monitor that the visit “is a slap in the face for terrorism. This visit is a proof of national unity among all the sons of the same homeland. No one, no matter how much, can defeat the Egyptian people, or at least export frustration to Egyptians.”

“The Pope himself insisted on coming, meaning that he was not intimidated by the explosions,” said Fr Rafic Greiche, spokesman for Egypt’s Catholic Coptic Church. He said the pope had shown himself to be “courageous” and in solidarity “with the Copts who were targeted, but also with all Egyptians,” he told I.Media.

Cardinal Jean-Louis Tauran, President of the Pontifical Council for Interreligious Dialogue, said security was “the main concern” regarding the Pope’s visit. 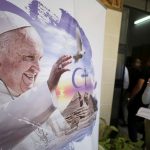 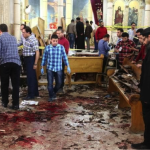