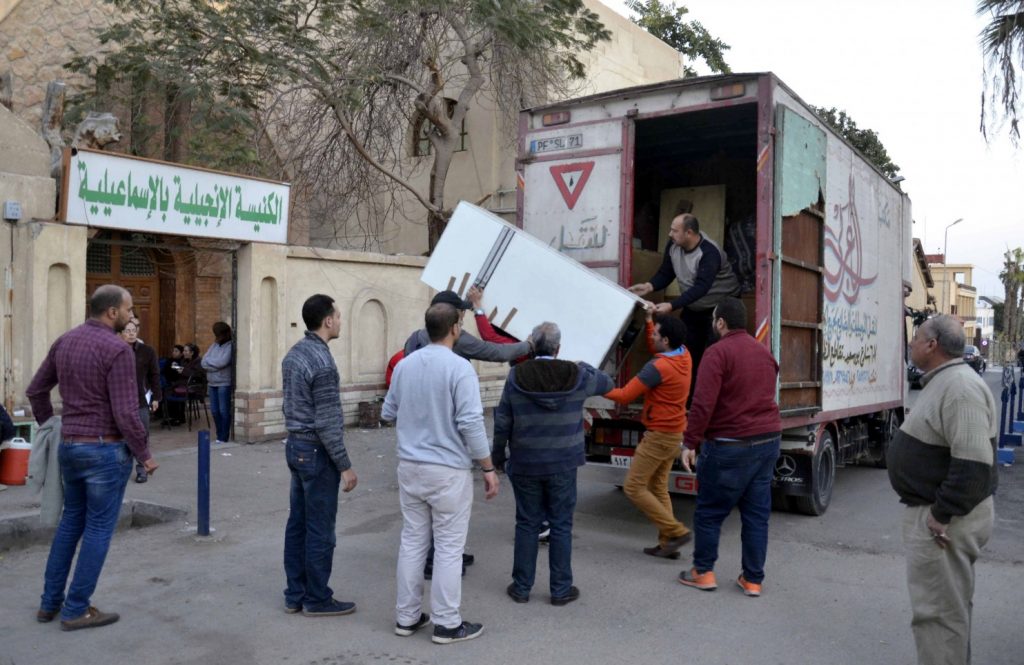 Egyptian Coptic Christians unload their belongings from a truck as they arrive to take refuge at the Evangelical Church in the Suez Canal city of Ismailia on Feb. 24. Hundreds of Coptic Christians have left Egypt’s Sinai Peninsula after a string of jihadist attacks killed seven Christians in the restive province, church officials said. (AFP/Getty Images)

Hundreds of Christians are fleeing Egypt’s restive Sinai Peninsula as the Islamic State affiliate there has increasingly targeted the community in recent weeks, according to witnesses, clergy and human rights activists.

In the past month alone, suspected Islamic State militants have killed seven Christians in the town of Arish, the capital of Egypt’s North Sinai province which borders the Gaza Strip and Israel. While no militant group has claimed responsibility for the assaults, the Islamic State affiliate, based in Sinai, warned in a video that it would escalate attacks against the besieged minority.

The victims include an elderly man who was shot in the head, and his son, who was burned alive Wednesday. Their bodies were dumped behind a school. On Thursday, suspected militants fatally shot a Christian man in his home, then stabbed his daughter to death, according to local authorities. Others Christians, including a teacher and veterinarian, were killed in drive-by shootings.

“Christians are being shot in their homes, in their places of work, in the streets, even in the markets,” said Mina Thabet, a human rights lawyer who is assisting the Christians who have fled. “There’s a lot fear in the community.”

The attacks threaten to further alienate Egypt’s Orthodox Coptic Christian community, which comprises 10 percent of the population. For years, they have felt discriminated against by the country’s Muslims, and assaults against them have intensified since the 2011 revolution, part of the Arab Spring uprisings, that overthrew President Hosni Mubarak.

One reason is that Christians supported the rise of President Abdel Fattah al-Sissi, who came to power following the ouster of elected Islamist President Mohamed Morsi in 2013. The community has since supported Sissi’s crackdown on Islamists. But anger within the community is growing. After each attack, the government promised to safeguard Christians with better security measures, only to see another assault on the community.

In December, the Islamic State claimed responsibility for the bombing of Cairo’s Coptic Cathedral complex, which killed more than two dozen worshipers and wounded scores more. It was the deadliest attack on the community in recent years, and appeared to mark a shift in the Islamic State’s strategy, to make Christians a primary target.

In other parts of the northern Sinai, a battleground between the government and Islamic militants since 2011, Christians have been forced to flee towns and village due to militant attacks and threats in recent years.

By Friday, at least 60 Christian families had fled Arish and were seeking shelter at a church in the city of Ismailia in northeastern Egypt, said Thabet, adding that the numbers are expected to rise in the coming days. Other local media reports suggested that as many as 1,000 Christians had fled Arish.

On Friday, the Coptic church leadership in Cairo denounced the attacks in Sinai and said it was following up on the plight of Christians there.

“These events aim to harm our national unity and tear down our unified front to fight against terrorism that is being imported to us in Egypt from abroad,” the church said in a brief statement. It added that the attacks were an effort “to take advantage of our current state of instability and continuous strife in the region.”

Heba Mahfouz in Cairo contributed to this report. 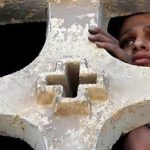 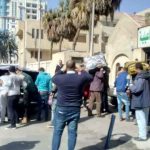