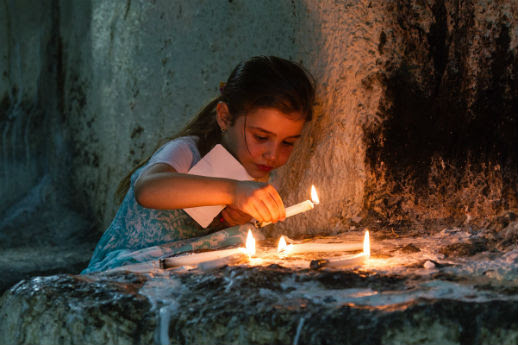 Young girl with a candle in an artificial cave at Mar Elia church, Ankawa (Irbil), where many of the displaced Christians took refuge. World Watch Monitor

On Monday (17 October) Iraq’s Army finally announced the beginning of its offensive to retake the northern city of Mosul from the “Islamic State” (IS).

Though Prime Minister Haider al-Abadi promised to resurrect the Iraqi flag over the city, not many Christians are hopeful of regaining their lost homes, in what once was an episcopal seat of the Assyrian Church of the East.

In Iraq as a whole, the Christian presence has been rapidly declining in recent decades. In the early 1990s, one and a half million Christians reportedly lived in the country. Today, at most 250,000 are thought to still be living there.

Half of the remaining Christians are displaced within Iraq. One of those displaced is Amer*, a middle-aged man, who was ousted from Mosul.

The city, now awaiting “liberation”, was where Amer was born and raised. It is where he knew every street and alley. Being a Christian, however, his presence was something unacceptable to most extremist Muslims in his home city.

While it was in 2014 that IS managed to seize power and fully act out its beliefs, Amer had seen his city change long before.

In his early youth, the atmosphere was less tense. Music, for example, was more accepted and Amer enjoyed his time as part of a wedding band.

But as time passed, the atmosphere in the city became grimmer.

“It wasn’t the buildings that changed, nothing you could see,” recalls Amer. “What changed was what lived in people’s hearts.”

It’s hard to say what caused the growth of sympathy for extremist Muslim views. But the effect on Christians was clear.

“We were seen as strangers, people that didn’t belong in Mosul [and] needed to convert,” Amer explains.

Over the years, several Christians – among them various church leaders – were kidnapped, and some even killed.

“Around me I heard Christians being threatened to convert or leave Mosul,” Amer recalls.

The pressure kept growing until, in the end, the extremists even prevented Christians from selling their houses.

What changed was what lived in people’s hearts.

No exact figure documents how many Christians left Mosul during those years, but in the 10 years before the city fell to IS, an estimated half a million Christians fled Iraq. Others fled to safer regions in the country, such as the Kurdish region. A large number of those refugees and displaced people came from Mosul and the surrounding area.

Still, Amer decided to stay in the city. He had married and had four children, two boys and two girls. Although the music business was under a lot of pressure, due to violence and Muslim extremism, he had opened a little shop, where he restored pianos and other instruments – for those who still used them.

But in June 2014, while Amer’s wife and children were away for the summer, the pressure on Christians came to a climax. IS took control of Mosul, leaving little space for Christians to exist.

“My shop was in a dangerous area, so I decided to take all I needed to my home and work from there,” he says.

While Amer’s house was marked with an “N” for “Nasrani”, or “Christian”, he kept a low profile, staying inside most of the time, working on some repairs. He had hoped that would be enough to keep him safe, but it wasn’t.

On every mosque, Islamic State fighters put up advertisements, re-establishing very strict Islamic rules, calling Christians to convert, pay a high tax (the jizya) as a mark of submission, or prepare to be killed.

I don’t believe in Islam. I’d rather leave my home than lie about my faith.

“I don’t believe in Islam and I would never say I do. I am a Christian and I’d rather leave my home than lie about my faith,” Amer says.

Amer couldn’t take much. His official documents, some money and his mobile phone – that was it.

“I was afraid, yes certainly. But it was a huge relief that my family was already out, that they were safe,” he says.

Having been informed that the IS fighters at checkpoints had become crueller by the day, he decided to take a risk and take a bumpy, dusty side road, a road leading around a checkpoint.

“I heard from my friends that this was what they did to the Christians – make them walk in the burning hot sun towards the next city,” he says.

Re-united with his family, Amer lives with his father-in-law, who fled Mosul a few years before. Amer’s situation is better than many others who had to flee; even though they share one room with the extended family, they have never had to live in a tent or a porta cabin like most of those displaced.

“Because I left Mosul, all I owned fell to IS. My house, my furniture and even my shop. I heard they used my house as some kind of a motel. Each time new families came and went,” he says.

IS members sat on Amer’s couch, ate from his plates and slept in his bed. Meanwhile, he was trying to find a way to provide for his family in displacement.

Despite losing most material things he owned, Amer still hadn’t lost his passion for music.

“I found a little shop in my new city and restarted my music business with the help of a charity loan,” he says. Soon, the local community brought in their instruments to sell and repair.

But being in Dohuk is only a short-term solution. With a growing economic crisis, he sees the income of his shop rapidly decreasing.

What about the future? “It’s unsure,” he says. “It is difficult to find light in this darkness. Lately I’ve started to think of migration as the only light. To get out of here.”

“For me the meaning of freedom and democracy is living in peace with all,” Amer says. “Unfortunately, there are people in our country who don’t understand this. They think democracy means throwing out all those who are different.” 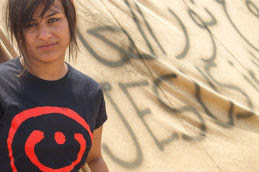 Girl wearing the ‘nuun’, priding herself in the mark of humiliation Islamic State daubed on Christian homes.
World Watch Monitor

Tragic as it is, the story of Amer is no exception. His situation is that of approximately 100,000 Christians in Iraq, who were displaced in 2014; in addition to 45,000 other Christians who had fled before because of direct or indirect threats, who also still live in displacement in their own country.

Some priests speak of five to seven families per day leaving Iraq. A quickly shrinking church, traumatised by years of war and persecution, remains. They describe their future in Iraq as “bleak”, but say they “continue to keep their hope in God”. 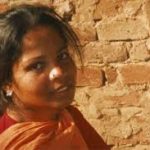