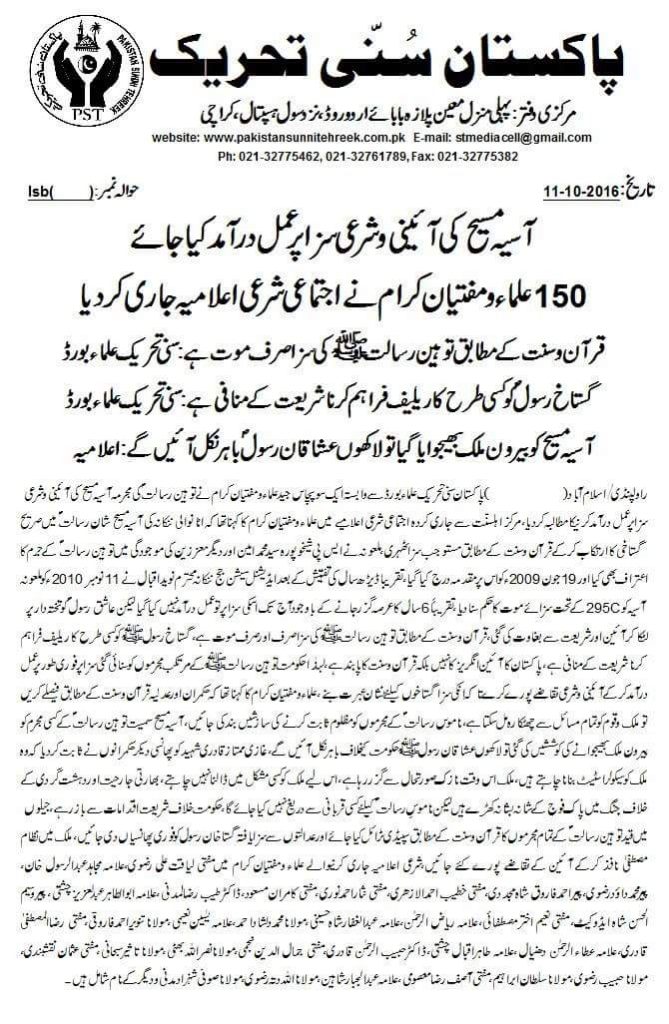 As Islamist groups warned of reprisals for a possible acquittal in Pakistan’s highest profile blasphemy case, the country’s Supreme Court today delayed ruling on an appeal against the death sentence given to Christian mother of five Aasiya Noreen.

The ruling on the death sentence given to Noreen, commonly known as Asia Bibi, was postponed when one of the judges recused himself. Justice Iqbal Hameedur Rehman announced the recusal at the beginning of the hearing on grounds that that he was part of the bench that heard the case of the assassination of former Punjab Province Gov. Salmaan Taseer, who was gunned down in 2011 after speaking in favor of Noreen.

“I was a part of the bench that was hearing the case of Salmaan Taseer, and this case is related to that,” Rehman said, urging the chief justice of Pakistan to form a new bench to hear the case.

Up to 3,000 policemen had been deployed in the Pakistani capital of Islamabad ahead of the appeal hearing as several Islamist groups, including the Pakistan Sunni Tehreek and ultra-Islamist Shuhada Foundation of the Lal Masjid (Red Mosque), had vowed severe repercussions if the court acquitted Noreen, 51, of the charge. About 100 police in riot gear were stationed outside the Supreme Court premises to thwart possible Islamist protests.

Taseer’s assassin, Malik Mumtaz Qadri, was hanged on Feb. 29 in a step liberals hailed as progressive, but which brought hardliners into the streets calling for Noreen’s death.

The Supreme Court, headed by Justice Mian Saqib Nisar, did not immediately set a new date for Noreen’s appeal.

Pakistan Interfaith League (PIL) Chairman Sajid Ishaq told Morning Star News that Noreen’s case was a test of the government’s resolve to establish its writ in face of religious extremism rampant in the country.

“It’s very unfortunate that a poor Christian woman has been made to suffer in jail for six years over a petty dispute over water,” he said, “but now that the case is before the highest judicial forum of the country, it is imperative that the government enforces its writ and take action against religious groups which are intimidating the judiciary and the government with threats of violent protests and ‘serious consequences.’”

Before the hearing, Noreen’s lawyer, Saiful Malook, accompanied by her husband, Ashiq Masih, told reporters outside the court that he was “very hopeful” that the court would admit their stance and order her freedom.

Malook also said that he has been receiving threats.

Following the indefinite adjournment, Ghulam Mustafa Chaudhry, counsel for the complainant against Noreen, said, “We are not pressurizing the court; we are ready to accept the court’s decision.”

Chaudhry said that he wanted the case to be decided “on merit and not on any foreign pressure.”

“Asia Bibi has been convicted and proven guilty not by one court but two courts, and I hope things will remain the same in the Supreme Court of Pakistan,” he said.

Noreen was convicted and sentenced to death by hanging in 2010 after an argument with a Muslim woman over a bowl of water. Although international attorneys note that lower courts did not consider which of three statements attributed to her were “blasphemous” nor prove the intent to blaspheme necessary for conviction, the courts upheld her conviction. If the Supreme Court bench upholds it, her only recourse would be a direct appeal to the president for clemency.

If the sentence is upheld, she would become the first person in Pakistan to be executed for blasphemy.

Observers and rights activists have called the case a battle for Pakistan’s soul as the state walks a line between upholding human rights and appeasing hardliners.

Zohra Yusuf, chairperson of the independent Human Rights Commission of Pakistan, said in a press statement that the appeal delay was “regrettable,” noting that Noreen was already being held in solitary confinement due to security concerns.

The judges may be “apprehensive,” she said, adding that after the Supreme Court announced its decision to uphold Qadri’s death sentence, justices had to sneak out the back door of the court.
“It’s a sensitive case,” Yusuf said. “I think they [the judges] have realized that if Asia Bibi [is] acquitted, they may be putting their own lives on the line.”

Islamists Threaten Violence
The Shuhada Foundation, which was formed after Pakistani security forces raided the ultra-extremist Lal Masjid (Red Mosque) in 2007, has said in a statement that its supporters would take to the streets and keep the government from functioning if Noreen were released.

“Lal Masjid will become a centre for the anti-government movement if Asia Masih is released,” foundation spokesman Hafiz Ehtesham Ahmad said. “We are seriously concerned at the efforts for the release of blasphemous Asia Masih and will consider those blasphemous who defend her, whoever they are and on whichever position they are working.”

The Pakistan Sunni Tehreek (PST), a religio-militant Islamist group, has also vowed violent protests across the country if the court releases Noreen. Thousands of PST activists had laid siege in the capital Islamabad after the hanging of Qadri, assassin of Taseer, demanding immediate execution of Noreen and all others accused of blaspheming against Muhammad.

In a verbal decree, the top scholars of PST also suggested that all those who might rescue those accused of blasphemy or who assist in trying to rescue them should be killed.

Noreen Unaware
In an interview with a local newspaper a few days before the much anticipated hearing, Noreen’s husband said that he had not informed his wife about the hearing date.

“We haven’t told her about the hearing in the Supreme Court yet,” Masih told the Express Tribune. “In the prison where she lives alone, it is very dangerous to lose hope.”

Noreen, who has two children from Masih and is stepmother to three others from his previous marriage, often asks her husband when she is going to get out of prison and be with her family.

“She asks us to get things done fast, but we have done whatever we could do,” he reportedly said, adding that Noreen’s daughter Esha was 10 years old, and her sister Esham only 9, when their mother was sentenced to death. “They have grown up without seeing their mother every day.” 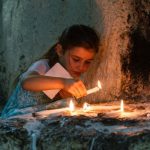