Coptic Solidarity extends our deepest condolences for the egregious loss of 84 lives in the recent terrorist attack in Nice, France. We mourn with you and the nation of France in this tragic time and condemn the cowardly attack against innocent men, women, and children in the strongest terms.

We have a special connection with France and stand in support of your in efforts to combat terrorism. France has been a steadfast partner with Copts and all minorities in the Middle East who are suffering increasing attacks by Islamic terrorists and systematic discrimination by governments and fundamental Islamists because of their faith. We deeply appreciate all that your nation has done both nationally in co-hosting a conference with Jordan last year to determine policy to assist persecuted communities in the Middle East as well as your leadership on these issues at the UN Security Council.

October 9, 2016 will mark the fifth anniversary of the Maspero Massacre in Cairo, Egypt in which 27 peaceful Copt demonstrators were massacred, 14 of whom were intentionally trampled and crushed under armed personnel carriers of the Egyptian Army. These peaceful protestors were merely drawing attention to the destruction of a Coptic Church in Aswan. Much like those who were commemorating Bastille Day in Nice, the street was filled with families, young children, and the elderly. While the circumstances of these horrific events are different, we know and again feel the pain upon hearing and seeing /images of the brutal murder of these innocents.

France has a rich history of democracy, freedom, and human rights. Coptic Solidarity stands with you as you strive to overcome the latest in a series of terrorist attacks and assure a life of liberty and security for your citizens. 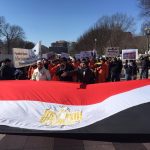 Call for a peaceful demonstration in front of the White House – August 2, 2016CS Releases & Articles