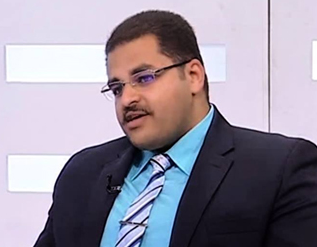 Researcher and rights activist Mina Thabet was released on LE10,000 bail after a court ordered his release on Saturday. Thabet is the director for minorities and marginalized groups at the Egyptian Commission for Rights and Freedom (ECRF). He is charged [Ar] with joining a terrorist organization, inciting protests, attacking police stations, and possession of publications of calling for the overthrow of the government. He was arrested [Ar] during the middle of the night on May 19, when police entered his home without a warrant.

Thabet was held in pre-trial detention for a month. According to Mada Masr, Thabet went to his most recent hearing on crutches due to the inhumane conditions of his detainment, and said, “I can’t stand up anymore. I am not going to ask you to release me for my future, but I am asking you to make arrangements just so my brother can help me go to the bathroom.” Ahmad Abdallah, Chairman of the Board of Trustees of ECRF, was also arrested on April 25. ECRF has documented the sharp increase in human rights abuses in Egypt, and provided legal advice to dissidents as well as the family of murdered Italian student Giulio Regeni.

Thabet’s release comes after considerable pressure from international human rights community. His arrest was criticized in statements from NGOs including Amnesty International and Human Rights Watch. “[Thabet] has tirelessly worked to defend the rights of minority groups, including Coptic Christians whom the government has suppressed for decades. His arrest is a flagrant attack against freedom of expression and association and provides damning proof of the Egyptian authorities’ vindictive resolve to silence anyone who dares to challenge the government’s narrative,” commented Magdalena Mughrabi, interim Deputy Director of the Middle East and North Africa Program at Amnesty International. Last week, United States Senator Marco Rubio highlighted the unjust nature of Thabet’s detention and called for his release in a tweet.