A human rights defender who worked with the coptic community has been arrested and charged with belonging to a terrorist group in Egypt, according to Christian Solidarity Worldwide (CSW).

Mina Thabet, minority rights program director at the Egyptian Commission for Rights and Freedoms (ECRF) was arrested at his home at 3.30am on May 19 and driven away in an unmarked car.

He has been charged with belonging to a terrorist group, inciting violence and public assembly, spreading fabricated information for terrorist pruposes, inciting attacks on police stations, and possession of leaflets undermining national security and the ruling regime.

“We are deeply concerned by the arrest of Mina Thabet and the worrying crackdown on civil society and human rights defenders,” said Mervyn Thomas, chief executive of CSW.

“Egypt undoubtedly faces an unprecedented terrorist threat that sometimes necessitates extraordinary measures; however human rights defenders ought to be viewed as allies in the effort to create a just and equitable society and accountable governance Mr Thabet and the ECRF perform invaluable work in highlighting the difficulties encountered by minority groups and assisting victims of violations to seek redress.”

ECRF works on minority rights, including the coptic community, and Thabet has worked on several cases, including the Coptic students who were convicted of blasphemy charges in February.

The evidence against Thabet includes an introductory paper on the Bread and Freedom Party, a notebook containing Virgin Mary pictures and documents on international law relating to the rights of minorities, according to CSW.

His arrest is not an isolated incident.

The president of the board of the ECRF, Ahmed Abdalla, was arrested in April and faces the same charges as Thabet.

“We…call upon the Egyptian authorities to adhere to the UN Declaration on Human Rights Defenders, which Egypt supported in 1998, which says that States should guarantee the rights of individuals, including in association with others, to promote and protect fundamental freedoms, which is what Mr Thabet and his colleagues are doing.” said Thomas 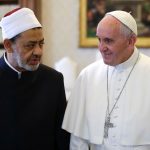