The Middle East has long been hostile to Christians and other religious minorities. Among those at risk are Egypt’s Copts.

During the reign of dictator Hosni Mubarak, the U.S. State Department called the status of Egyptian religious liberty “poor” and noted that Christians and Baha’is faced “personal and collective discrimination.” Attacks on Copts were common, and perpetrators rarely were prosecuted.

Mubarak’s overthrow led Copts to hope for a freer and safer Egypt. But under Mubarak’s successor, President Mohamed Morsi, violence against Copts increased. Morsi was not the only culprit. In one infamous case, the military–then headed by Gen. Abdel Fattah al-Sisi–shot down more than a score of Coptic protesters.

Coptic Pope Tawadros II publicly supported the coup. But the church remained as vulnerable as it was visible, and was targeted by angry Islamists. Dozens of churches were destroyed.

In January, al-Sisi celebrated Christmas at a Coptic service and promised to rebuild churches that had been destroyed. So far, however, the government has delivered more promises than actions.

Mina Thabet of the Egyptian Commission for Rights and Freedoms complained that al-Sisi was no liberal and “doesn’t care about religious freedom.” Certainly he evidenced no interest prior to the coup.

Nor is the only problem attacks on churches (which have diminished). The State Department noted that Egypt’s government did not recognize conversion from Islam and prosecuted people for religious defamation and blasphemy, including many Copts. In February, four teenage Copts were sentenced to five years in prison for a video directed against the Islamic State but treated as an attack on Islam.

The government failed to respond to attacks on Christians. The State Department added that the lack of accountability “fostered a climate of impunity.”

Even if Copts believe they remain safer under al-Sisi, they may have sold their liberty for what turns out to be a mess of security pottage. Copts live in the same unfree society as everyone else.

Coptic film critic Joseph Fahim wrote two years ago: “more than 40,000 arrests have been made since Morsi’s overthrow, journalists have been prosecuted, artists have been censored, opposition voices have been violently silenced, dissented politicians have been witch-hunted, the Mubarak regime has successfully reassembled itself, institutional corruption has grown more rampant, the country has descended into further chaos and fear has become the prevailing sentiment of the day.”

According to the State Department’s 2015 human rights report: “The most significant human rights problems were excessive use of force by security forces, deficiencies in due process, and the suppression of civil liberties. Excessive use of force included unlawful killings and torture. Due process problems included the excessive use of preventative custody and pretrial detention, the use of military courts to try civilians, and trials involving hundreds of defendants in which authorities did not present evidence on an individual basis. Civil liberties problems included societal and governmental restrictions on freedoms of expression and the press, as well as on the freedoms of assembly and association.”

Many people simply disappear. The latest case to embarrass the government involves a 28-year-old Italian graduate student. The government tried to blame his death on a car accident. His mutilated body showed signs of torture.

Cairo currently is shutting down organizations that report on government abuses, including the anti-torture Nadeem Center. Two years ago, I wrote in Forbes, “I was a member of a delegation of lawyers who visited the Nadeem Center. Co-founder Aida Seif al-Dawla told us that torture was more pervasive then than at any point during the Mubarak era.”

Today Egypt is scary for anyone who dissents. Unfortunately, sustained repression has only encouraged radicalization and more terrorist attacks, leaving Coptic Christians even more vulnerable. 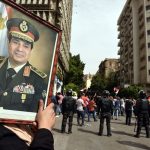