An Egyptian Copt, Bishoy Kameel Garas, has been declared ‘innocent’ after he spent more than half his 6-year sentence for charges including defamation of Islam, the Cairo Court of Cassation has ruled.

Garas, now in his late twenties, was jailed in September 2012 for offending the country’s dominant religion, the then-Egyptian President Mohamed Morsi, and a Muslim sheikh’s sister. The charges related to Facebook posts found on a fake page opened in his name.

On 25 July, Cairo’s senior court had ruled against the prison sentence, but it took Garas until 9 Oct. to be released, due to “intransigence by the prosecution, and prison authorities dragging their feet”, his lawyer Magdy Farouk Saeed told World Watch Monitor back in November.

Despite mounting evidence weighing on the side of his acquittal, the prosecution and two lower courts insisted on condemning the Christian, until the higher court finally declared him innocent on March 13.

As with other blasphemy cases levelled against Christians and seculars, the proceedings were bedevilled by mob pressure and judicial religious prejudice.

“Back in 2012, the defence team was mobbed by scores of angry people around and inside the courthouse shouting, ‘Are you Muslims or what?’ The lawyers were themselves accused of apostasy and had to be spirited from the court’s security office,” said Ishak Ibrahim from the Egyptian Initiative for Personal Rights (EIPR).

Coptic activists insist the proceedings were a travesty from the beginning.

“To be accused of defamation (of Islam) is to be guilty of it, especially with the mob pressure and rioting accompanying the proceedings,” said Safwat Samaan, director of Nation Without Borders, a human rights advocacy group.

Instead of investigating the hacking, which Garas insisted was done out of malice by a certain “Michael”, the prosecutor said, ‘Bishoy is as good as Michael!’

Garas, a teacher of English, had posted warnings on his own Facebook page about the fake account and alerted cyber police. Still, he was sentenced despite claims of a named hacker and cyber investigation reports attesting to his innocence.

“Instead of investigating the hacking, which Garas insisted was done out of malice by a certain “Michael” – now away in Italy – the prosecutor said, ‘Bishoy is as good as Michael!’ (Both names easily identified in Egypt as Christian),” added Mena Thabet, a religious liberties researcher with the Egyptian Commission for Rights and Freedoms.

“The judge would not hear the difference between one’s own genuine Facebook page and a page created by another assuming a false identity,” added Samaan, quoting sources close to the proceedings.

The ‘guilty’ ruling went ahead anyway, and was later partly upheld by a court of appeal.

After the acquittal
All experts agree that Garas, now legally cleared of guilt, cannot hope to receive adequate compensation.
“The defendant will have his three years in jail as credit, to be debited in case he’s sentenced for any future offenses,” said Samaan, describing the situation as a “legal travesty.”

Garas, understandably, didn’t have much to say about the legal side. “Within ten days from the beginning of the proceedings, my school dismissed me from my job,” said Garas during a call-in with an Egyptian Christian television channel, Alhorreya TV. He remains uncertain about the possibility of going back to his home town in the province of Asyut (370 km south of Cairo) or claiming his job back.

“Bishoy’s poor father spent money he could not afford over the trials of his son,” noted Samaan.

According to EIPR, nine cases of ‘defamation of religion’ have been filed in Egyptian courts since January 2015. Twelve people have been convicted. Twelve more cases are pending. Over the 2011-2013 period, courts processed 28 cases, where 28 defendants out of 42 were found guilty.

Earlier this year, Feb. 25, Egypt sentenced four Christian teenagers to up to five years in prison each for mimicking Islamic prayer as part of the ritual before beheadings carried out by jihadists.

On Thursday, March 31, a court of appeal upheld a 3-year prison sentence against a liberal Muslim poet, Fatma Naout, who had expressed disgust at the ritual killings of thousands of animals during Eid.

Last December, Islam Behery, a researcher with a wide TV following, was sentenced to a year for contending Islam’s received teachings were the source of terror. 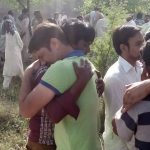