“This may be the last solid chance for the country as a whole to avoid jumping into the unknown. We must seize the opportunity and put the country back on the right track,” says political commentator Abdallah El-Sennawy, referring to a political dialogue took place on Tuesday at the presidential palace.

The dialogue was held upon an invitation that many insiders say was “inspired” by an initiative by El-Sennawy himself, a supporter turned mild critic of President Abdel-Fattah El-Sisi.

Tuesday’s dialogue allowed the president to listen to concerns expressed by over 20 intellectuals (none of whom represent hardline opposition) regarding issues ranging from socio-economic rights to the clamp down on freedoms and civil society.

“The meeting lasted for three hours and seven or eight of the participants spoke at length about limitations imposed on public freedoms, the concern over conditions of human rights and Egypt’s international image, the fate of prisoners and detainees, and matters related to the supposed display of disrespect for religions,” El-Sennawy said.

He argued that each of these issues was presented through “multiple perspectives,” and there was a great deal of uneasiness over the state of current affairs and the potential negative implications of high-level interventions failing to take place.

According to El-Sennawy, “President El-Sisi listened attentively and showed a great deal of respect for the ideas presented, although he repeatedly indicated that some of the ideas were unrealistic and may be too difficult to carry out in a fashion compatible with state security concerns.”

This is precisely why, El-Sennawy added, the president asked for “working groups” to be assembled to follow up on proposals made in a way that would be “realistic.”

El-Sennawy said in a telephone interview with Ahram Online that the president showed “openness” to improving police performance and revisiting issues surrounding prisoners and detainees.

“I guess we could say that the release of Mahmoud Mohamed, the t-shirt boy…is a step in this direction,” he said.

Hours after the afternoon meeting between El-Sisi and the group of intellectuals ended, a judicial order was issued to release the 18-year-old who was arrested in January 2014 for wearing a t-shirt reading “a nation without torture.”

“I am expecting more releases in the coming weeks. I am aware of lists being compiled of suspects [who have been held in overdue detention] and I heard the president again affirming his awareness that some young men are being unfairly held in police custody,” El-Sennawy said.

He predicted the “upcoming release of detained journalists in parallel with the 75th jubilee of the press syndicate. “Others would follow,” he suggested without offering any specifics as to the profile of potential candidates for release.

He declined to comment on information from security sources indicating that leading revolutionary figures such as Alaa Abdel-Fattah, Ahmed Maher, and Ahmed Doma are not among the list of candidates for judiciary release or pardon.

Instead he said that the president realises that “something has to be done on this matter of detainees and prisoners.”

El-Sennawy added that the president ordered the review of cases of Egyptians who have been living overseas since June 30 and have been “too closely associated with the Muslim Brotherhood, especially through the sympathetic media outlets.”

“For example, if TV broadcaster Tarek Abdel-Gaber (who had expressed his desire to come back to Egypt to retire for cancer treatment) was allowed back without any threats, others would follow,” he said.

Abdel-Gaber, who had been working with an Islamist sympathetic TV channel following the ouster of Mohamed Morsi on 3 July, had appeared on a couple of private TV satellite channels and expressed a wish to come back to Egypt while sharing his fears that he may be arrested on alleged charges of Muslim Brotherhood association.

Meanwhile, El-Sennawy said that the president shared security and economic concerns with participants in today’s meeting.

The president, El-Sennawy added, promised that he would try to do everything “within his constitutional term mandate” to fix these “daunting problems.”

“He openly said that Egypt is no longer ruled by pharoahs and that he would not and could not overstay the constitutional mandate. I think that this is a clear closure to the speculation over plans to amend the constitution to allow for the extension of [his] time in office,” El-Sennawy argued.

According to El-Sennawy, there are reasons to “hope” that today’s meeting is not just a public relations’ exercise designed to reduce the volume of international criticism of El-Sisi’s regime.

“I think he really wants to try and improve things and he asked to meet up with us again in a month from today to follow up on our discussion,” El-Sennawy said.

He added that within the coming days, the president would decide his next round of political dialogue.

“I think we could see the next round taking place in a couple of weeks or less and I think that the next group to be invited would be either youth, women, or journalists,” El-Sennawy said.

He added that he is convinced that the president is going to make time for diverse groups.

El-Sennawy is hopeful that “all concerned” would try to make the best out of “a clearly positive beginning.”

“I think that this is the only solid chance for the country to bypass a serious crisis and to reach out to a national consensus based on constitutional legitimacy,” El-Sennawy said.

It is this consensus and this commitment to the constitution, he added, that should allow for the reform of institutions, political stability, and eventually economic improvement.

“The alternative is not going to be in favour of anyone. This is not a country that could put up with any havoc. We need to opt for a positive spirit and constructive action,” he insisted. 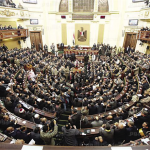