The Islamic State (IS) group has said it carried out an attack that killed at least 13 policemen in Egypt’s restive Sinai Peninsula.

A mortar attack hit a checkpoint in the city of El-Arish, officials said.

But the group claimed a suicide bomber blew up a car with explosives at the checkpoint, which it then raided.

Jihadist militants have killed hundreds of security personnel in Sinai since the military overthrew President Mohammed Morsi in 2013.

Witnesses reported hearing a massive explosion and said the city had been sealed off.

Government forces later killed five of the militants who carried out the attack, officials said.

In a statement on Twitter, IS said the attack was “part of a series of operations in response to the humiliation and searching of Muslim women at checkpoints”.

It has also said it was responsible for the bombing of a Russian airliner over Sinai in October that killed all 224 people on board. 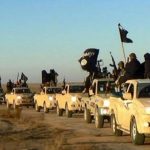