Passing by a Coptic church in the narrow alleys of Shubra in Cairo, one can clearly hear the alhan (Coptic hymns) sung in a harmonious, melismatic melody, on the loud and chiming tunes of two distinctive musical instruments: the cymbals and the triangle.

It is unknown when the use of the cymbals (daff) and the triangle (trianto) was introduced into the Coptic church, especially since their use was previously frowned upon by many early church fathers.According to Father Shenouda Maher Ishak, “The prohibition of the use of musical instruments in the Coptic church dates back to the early centuries, when the church in the East and the church in the West, wanted to sever all connection with idolatry. The church prohibited the use of musical instruments as it was deeply associated with pagan practice.”

Meanwhile, the Old Testament in the Bible mentions the use of the cymbals, the triangle, as well as other musical instruments. “Praise him with the clash of cymbals, praise him with resounding cymbals.” (Psalm 150:5) and “As they arrived, David was returning from a campaign against the Philistines. Women from all of Israel’s cities came to meet King Saul. They sang and danced, accompanied by tambourines, joyful music, and triangles.” (1 Samuel 18:6).

Several sources suggest that the use of the cymbals and triangle in churches began in the Middle Ages. Musical instruments were believed to have been introduced in a limited form so as to avoid inducing pagan worship. Accordingly, the cymbals and the triangle were only used to set the rhythm for hymns and praises.

Today, they are still used for the same purpose.

The Coptic Orthodox church resorts to these two instruments to unify singing and maintain the rhythm of the tunes. Played by one of the deacons in the church or the cantor, the use of these instruments often signal the participation of the congregation in singing during the holy mass.

For nearly twenty centuries, Coptic hymns and traditions were passed down verbally from one generation onto the next. The Coptic church has six musical types: Annual (throughout the year), Kiahky (the month before Christmas), Fasting (during lent and Jonah’s fast), Sha’aniny (on Palm Sunday), Hazayny (meaning sorrowful, during the Holy Week and funerals), and Farayhy (meaning joyful, on feasts). The only time these instruments are not used in the church is during the Holy Week, the most important week in the Coptic church, as it is deemed a time of extreme sorrow.

When children are ordained as deacons, one of the first teachings offered to them is how to play the cymbals and the triangle.
Between transitions, intonation, and changes in speed and rhythm, Coptic hymns are characterized by a distinctive style, and are a key element in songs and praises in the Coptic Orthodox church. 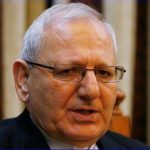 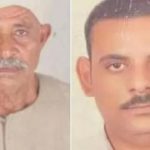