An Egyptian court acquitted three men who led a Muslim mob to strip, beat, spit on and humiliate a Christian grandmother whose son was falsely accused of having a romantic relationship with a Muslim woman.

Soad Thabet had to leave her village in Minya governorate in 2016 after the mob attack, during which homes of local Coptic Christians were also burned down.

“They haven’t been able to return to their village. It would be nice if they could consider going back, but at this point it’s not even an option. I have no idea where they’ll go,” Coptic Solidarity Director of Development and Advocacy Lindsay Griffin told The Christian Post of Thabet’s family. “When there’s collective punishment, typically people who are forced to leave their villages have to relocate. Some even try to leave the country eventually. They’re elderly, so they probably won’t want to leave.”

In Thabet’s case, the Egyptian government failed to enforce justice in several ways, Griffin explained. Police threatened her when she told them her family had received threats from neighbors. When a mob of 300 Muslims attacked her along with her family, the police waited hours before responding to her calls for help. Courts sentenced three of her attackers to 10 years in prison, then acquitted them despite ample witness testimony and video recordings.

After hearing the court decision on Thursday, Thabet burst into tears and said, “What shall I do after being so humiliated! My right is in the hands of my Lord who shall render me His justice,” Coptic Solidarity reported.

“The Egyptian judiciary very rarely holds anyone accountable,” Griffin said. “What we talk about is systematic discrimination. In every area of life, [Christians] are treated as second class citizens. There’s a governmental and societal mentality of discrimination. Muslims are superior in their minds. In no world do they want a Muslim to be responsible to any kind of crime against a Christian.”

Griffin said the Trump administration has not helped Coptic Christians. Although the administration has been willing to condemn and criticize China, it hasn’t applied the same focus to countries like Turkey, Egypt and Saudi Arabia. Trump invited Egypt’s president, Abdel-Fattah el-Sissi, to the White House and Egypt receives $1.3 billion a year in military aid from the United States.

“President Trump doesn’t really care about the Copts. None of [his administration] have held Egypt accountable for all that money they get,” she said. “We’ve met with the White House, and you get this line of ‘the Muslim Brotherhood was worse.’”

This alliance with Egypt often muffles concerns over the country’s treatment of Christians, she said, adding that the Egyptian government further muddies the waters by publicizing small acts for religious freedom while hiding a consistent policy of repression.

Egypt publicized the opening of a few new church buildings while forcing 5,415 churches to navigate a hostile bureaucracy to remain open, according to Griffin. Despite the widespread repression, the United States Commission on International Religious Freedom said “religious freedom conditions in Egypt are trending tentatively in a positive direction.”

American evangelical Christians often get fooled by the Egyptian government’s publicity stunts too, she contended. She pointed to Christian author Joel Rosenberg as one example. In a 2019 op-ed, Rosenberg praised Egypt’s government for its religious freedom work and efforts to fight violent extremism.

“[T]he leader of the Arab world’s most populous country is charting a path toward modernity and tolerance that is giving great hope to the country’s religious minorities which have too often been subject to discrimination or worse by extremists,” he wrote.

Griffin said she warned him that the Egyptian government’s perspective was deceptive.

“[Christian leaders] go on these trips. They get wined and dined and get given the government line from churches. But those people are under incredible pressure to make the government look good,” Griffin stated.

But she has concerns about how the new administration will approach radical groups like the Muslim Brotherhood.

“When Clinton was secretary of state, there was a lot more interaction with the Muslim Brotherhood, and it didn’t view them as a terrorist organization,” she recalled. “There was a much more favorable reception of them.”

Griffin said it’s unlikely that the acquittal of Thabet’s attackers will be overturned unless leaders high in the Egyptian government take action.

To help Christians in Egypt, people can sign petitions for Egypt’s government to free Ramy Kamel, an activist for religious freedom, Griffin noted. 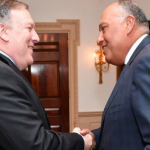