This is an open letter from me asking for your solidarity and support. It is long, bear with me please. My name is Mona Seif, I am an Egyptian HRD. Over the past few weeks the Egyptian regime has been escalating violent targeting of my family. If you are following the news from this art of the world then you know how most of the media platforms have been blocked and many journalists detained, harassed, or pushed into exile. So I am writing to you, hoping you will carry my voice and that of everyone facing injustice here.

My brother Alaa Abdel Fattah has been in jail since last September. He was rearrested only 6 months after he got out of prison after completing a full five-years sentence. He has been in maximum security prison for 10 months in horrific conditions and daily violations of his rights, Egyptian laws and prison regulations. For the past months we have filed numerous official complaints, appealed to all sorts of entities here that have jurisdiction over the prison authorities, but none of them made any move to stop the violations or start a serious investigation. None of them made any attempt to bring us just a small bit of our rights.

On the night of Alaa’s arrival to Tora Maximum security prison 2 he was stripped of his clothes, blind folded, beaten and threatened that “He will never get out of here”, we have submitted an official report to the general prosecutor, we have repeatedly met with the head of his Human Rights administration, Alaa went on record in state security prosecution while reviewing his pretrial detention and testified in details on the torture he endured. Until now, not one serious move was taken regarding this horrific incident, and it was an intro to the kind of prison he will be locked in.

Since the crisis of COVID-19 started, the Egyptian MOI has used it as an excuse to tighten the isolation of all prisoners, increase intimidation of prisoners and their families, and escalate in their deprivation of their basic rights. Since March 9th all visits have been completely banned in all prisons all over Egypt, however the families were not offered any alternative form of communication. We were not allowed phone calls with the prisoners, and most prisons are not allowing letters, even though both are explicit rights by the law, not to mention worrying times like these. Some prisoners were trying to get the word out about the deterioration of their health, about fear of Corona in prisons, the lack of proper information to help them understand the toll of the crisis and lack of sanitary measures indifferent Egypt, the only response the MOI was clamping down even harder on those prisoners, punishing those who voiced out their concerns, all this while the arrests of more activists is ongoing and the arrest of doctors who talk publicly about their needs, problems and the reality of managing COVID-19 within our health system.

With Alaa in particular, state security seems intent on preventing any sort of communication between us and him, even at times when they are allowing letters from other prisoners. Alaa went on a hunger strike on April12th and they did not even inform us. For a whole month during the COVID-19 emergency, my brother was on full hunger strike, my mother spent every morning at the prison’s gate and they did not allow us one letter to assure us of his well being.

For every letter received we as a family paid a heavy price. We received a letter after Alaa ended his hunger strike on May 18th, and another on June 6th after my mother camped daily by Tora prison. Then the last one we got was on June 25th after we were violently assaulted and robbed right in front of Tora prison on the watch of their guards, and only after my younger sister Sanaa was abducted by plainclothed officers while entering the general prosecutor’s office- with her lawyer- to report the violent assault and officially document her injuries. Sanaa is now detained, and we haven’t been allowed any letters from her as well.

I think I’ve seen a lot, I’ve witnessed so many violations committed by the current and previous regimes, but somehow I would have never imagined that a victim of a violent assault would be kidnapped by state security from the gates of the general prosecutor’s office as they are trying to seek his protection and file an official complaint regarding a very public incident like the one we were part of. And it definitely wouldn’t have occurred to me that not only the general prosecutor would turn a blind eye on such a grave crime committed at his doorstep, but actually enable them to “legalize” her detention afterwards.

Both Sanaa and Alaa are in prison. They, and thousands of prisoners, are at risk facing the combined danger of an epidemic and a brutal senseless regime. Please speak up on their behalf. 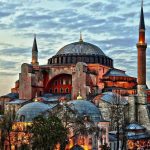 A Sword Over the Nile: New Book Exposes 14 Centuries of Christian PersecutionSelected Opinion