April 24 marks the “Great Crime,” that is, the genocide of Christians—mostly Armenians but also Assyrians and Greeks—that took place under the Islamic Ottoman Empire, throughout World War I.  Then, in an attempt to wipe out as many Christians as possible, the Turks massacred approximately 1.5 million Armenians, 300,000 Assyrians, and 750,000 Greeks.

Most objective American historians who have studied the question unequivocally agree that it was a deliberate, calculated genocide:

Similarly, in 1920, U.S. Senate Resolution 359 heard testimony that included evidence of “[m]utilation, violation, torture, and death [which] have left their haunting memories in a hundred beautiful Armenian valleys, and the traveler in that region is seldom free from the evidence of this most colossal crime of all the ages.”

In her memoir, Ravished Armenia, Aurora Mardiganian described being raped and thrown into a harem (consistent with Islam’s rules of war).  Unlike thousands of other Armenian girls who were discarded after being defiled, she managed to escape. In the city of Malatia, she saw 16 Christian girls crucified: “Each girl had been nailed alive upon her cross,” she wrote, “spikes through her feet and hands, only their hair blown by the wind, covered their bodies.”  Such scenes were portrayed in the 1919 documentary film Auction of Souls, some of which is based on Mardiganian’s memoirs.

Whereas the genocide is largely acknowledged in the West, one of its primary if not fundamental causes is habitually overlooked: religion.  The genocide is usually articulated through a singularly secular paradigm, one that factors only things that are intelligible from a secular, Western point of view—such as identity and gender politics, nationalism, and territorial disputes. Such an approach does little more than project modern Western perspectives onto vastly different civilizations and eras.

War, of course, is another factor that clouds the true face of the genocide.  Because these atrocities mostly occurred during World War I, so the argument goes, they are ultimately a reflection of just that—war, in all its chaos and destruction, and nothing more.  But as Winston Churchill, who described the massacres as an “administrative holocaust,” correctly observed, “The opportunity [WWI] presented itself for clearing Turkish soil of a Christian race.”  Even Adolf Hitler had pointed out that “Turkey is taking advantage of the war in order to thoroughly liquidate its internal foes, i.e., the indigenous Christians, without being thereby disturbed by foreign intervention.”

It’s worth noting that little has changed; in the context of war in Iraq, Syria, and Libya, the first to be targeted for genocide have been Christians and other minorities.

But even the most cited factor of the Armenian Genocide, “ethnic identity conflict,” while legitimate, must be understood in light of the fact that, historically, religion accounted more for a person’s identity than language or heritage.   This is daily demonstrated throughout the Islamic world today, where Muslim governments and Muslim mobs persecute Christian minorities who share the same race, ethnicity, language, and culture; minorities who are indistinguishable from the majority—except, of course, for being non-Muslims, or “infidels.”

As one Armenian studies professor asks, “If it [the Armenian Genocide] was a feud between Turks and Armenians, what explains the genocide carried out by Turkey against the Christian Assyrians at the same time?” The same can be said about the Greeks. From a Turkish perspective, the primary thing Armenians, Assyrians, and Greeks had in common was that they were all Christian “infidels.”

According to a 2017 book, Year of the Sword: The Assyrian Christian Genocide, the “policy of ethnic cleansing was stirred up by pan-Islamism and religious fanaticism.  Christians were considered infidels (kafir).  The call to Jihad, decreed on 29 November 1914 and instigated and orchestrated for political ends, was part of the plan” to “combine and sweep over the lands of Christians and to exterminate them.”   As with Armenians and Greeks, eyewitness accounts tell of the sadistic eye-gouging of Assyrians and the gang rape of their children on church altars. According to key documents, all this was part of “an Ottoman plan to exterminate Turkey’s Christians.”

Today, from Indonesia in the east to Morocco in the west, from Central Asia in the north, to sub-Sahara Africa—that is, throughout the entire Islamic world—Muslims are, to varying degrees, persecuting, killing, raping, enslaving, torturing and dislocating Christians; where formal Islamic groups such as the Islamic State (ISIS), Al Shabaab, Boko Haram, etc., hold sway, Christians and other “infidels” are literally experiencing a genocide.  (See my book, Crucified Again: Exposing Islam’s New War on Christians — or my monthly “Muslim Persecution of Christians” report — for a comprehensive and ongoing account of the “great crime” of our times.)

To understand how the historic genocide of Armenians and Assyrians is representative of the modern day plight of Christians under Islam, one need only read the following words written in 1918 by President Theodore Roosevelt; however, read “Armenian” as “Christian” and “Turkish” as  “Islamic,” as supplied in brackets:

Similarly, if we “fail to deal radically” with the “horror” currently being visited upon millions of Christians around the Islamic world, we “condone it” and had better cease talking “mischievous nonsense” of a utopian world of peace and tolerance.

Put differently, silence is always the ally of those who would liquidate the “other.”  In 1915, Adolf Hitler rationalized his genocidal plans, which he implemented some three decades later, when he rhetorically asked: “Who, after all, speaks today of the annihilation of the Armenians?”

And who among today’s major politicians speaks—let alone does anything—about the ongoing annihilation of Christians by Muslims, most recently (but not singularly) seen in the Easter Sunday church bombings of Sri Lanka that left over 300 dead?

Note: Chapter 4 of the author’s recent book, Sword and Scimitar: Fourteen Centuries of War between Islam and the West, documents how the first “genocide” of Armenians at the hands of Turks actually began precisely one millennium ago, in the year 1019.

Photo: A still frame from the 1919 documentary film Auction of Souls, which portrayed eye witnessed events from the Armenian Genocide, including stripped naked and crucified Christian girls. 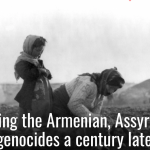 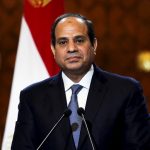