The National Prayer Breakfast is an annual event attended by more than 3,000 individuals from more than 120 nations. One would think it is the perfect platform to create awareness of the plight of Copts in Egypt and to solicit international assistance to improve it.

That said, every individual Copt Coptic Solidarity (CS) approached with the chance to speak at it chose to forgo the opportunity—a curious fact worth contemplating (*).

Some background information: Several months ago, CS was approached to find a Coptic Christian from Egypt who would share their story at the National Prayer Breakfast. Knowing many recent Coptic immigrants, CS immediately outreached to a variety of individuals who had compelling testimonies of persecution and discrimination in Egypt. However, every single one of these individuals declined participating in this public event. Why?

Simple: they are all too scared; they fear retaliation against family members still living in Egypt; they even fear retaliation here, in the relative safety of the United States, because the Coptic community is well aware of the long reach of the Egyptian government.

Coptic Solidarity’s current president, (a volunteer 2-yr role based on board elections) Mrs. Caroline Doss Esq., is an immigration attorney in New Jersey, home to the largest Coptic diaspora community. The majority of Mrs. Doss’ clients are Coptic, but she also regularly assists moderate and secular Muslims from Egypt. Through her professional capacity, Mrs. Doss always has a current perspective on the situation for Copts in Egypt, and the increasing authoritarian nature of el-Sisi’s government, which is driving both Muslims and religious minorities out of the country.

The picture painted by the most recent immigrants is one of an Egypt that many would not recognize. The level of social hostility towards Copts and all religious minorities is so great that they are frequently attacked and harassed in public, going about everyday business. Women in particular share harrowing accounts of sexual harassment and assault, often just for not wearing a veil in public. Copts fear for their very lives—never mind the continued closure of their churches and attacks on their homes and businesses.

The Egyptian government and many in the West attribute this to terrorist groups such as ISIS. Reality in Egypt is quite different. The vast majority of persecution and discrimination against Copts originates within Egyptian government and society. This is the real driver of Coptic emigration to the West—for those few with the sufficient resources and contacts to leave.

The vast majority of Copts do not have the means to leave Egypt and establish lives elsewhere. And why should they try? A government’s primary objective is to protect its citizens—something the Egyptian government is miserably failing to do.

Further highlighting this situation, prominent Coptic human rights activist, Mr. Ramy Kamal, has been imprisoned without credible cause, beaten at least twice, and had his detention extended by 15 days at each renewal hearing without reason. He was one of the last, best sources documenting and reporting on the human rights abuses against Copts.

These tactics are not limited to Egypt. One CS board member had his personal email and social media accounts hacked and taken over. Upon seeking help from the FBI, they tracked the hacking back to Egypt. Earlier this year, a US-based Egyptian government official sent an email to American Copts accusing a CS member of being “an enemy of Egypt” (sic.) a barely veiled incitation against him.

The reality for Copts, and all Egyptians, is bleak. Civil society has been shuttered. Political opposition has been intimidated, imprisoned, or murdered. Jails are crowded with dozens of prisoners of conscience. Egyptians are on notice that even a perceived infraction could land them in prison or worse. Even if they successfully emigrate to a free country, they feel that they and their families can still be targeted.

From here one understands why no Copts in the US would brave speaking at the National Prayer Breakfast. This unfortunate but telling reality should convince the US government to pressure Egypt. As for those in the US government and religious leaders who continue to praise President el-Sisi and the Egyptian government for their supposed “progress” on freedom, religious and otherwise, let them take note of the contradictory facts.

(*) Just before this article was published, one person gave preliminary agreement to speak publicly. 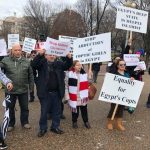 Who is Coptic Solidarity and what do we do?CS Releases & Articles 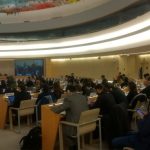