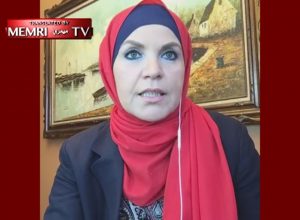 Some of the most vicious incitement against Christians in Egypt originates from a petite Egyptian woman sitting at a computer in her home in a quiet suburb of New Jersey.

It is not as though Egypt’s Muslim community needs any encouragement to go after Coptic Christians, but Arat Oraby does her part, calling the Copts a “gang” that needs to be boycotted and subjugated.

“The problem of the Christians in Egypt is that they follow the church gang,” she wrote. “They believe that (Coptic Pope) Tawadoros the criminal, or any other criminal who will replace him, was selected by the Lord and speaks on His behalf. The church gang deceives its followers in this despicable way, just like a thief or a swindler from the Middle Ages.”

She often refers to Christians as “Nazarenes,” as they are called in the Quran and by ISIS, and tells Egyptians to boycott Coptic businesses and buy only from fellow Muslims.

A Coptic priest was murdered on the streets of Cairo last week by a young Muslim, the latest in a string of murders and church bombings that began more than a year ago.

The Investigative Project on Terrorism Thursday naming Oraby as the head of the spear when it comes to inciting violence against Egypt’s Christian community.

And Oraby does it all from the comforts of her home in Jersey, the same state where the latest Islamic terrorist, Sayfullo Saipov, lived and attended a radical mosque before he killed eight New Yorkers in a truck attack on Halloween.

Oraby is merely continuing her role as instigator in the Arab Spring uprisings that began in 2010 with the goal of replacing “secular Islamic” regimes in the Middle East with hardcore religious ones.

“As for Muslims, they are the food of the nations. This is a period when the Prophet (peace and blessings of Allah be upon him) told us that the Caliphate will come again.”
– Ayat Oraby, Egyptian Muslim activist who migrated to U.S. in 1993

She migrated to America in 1993 and presented herself for years as a liberal Muslim while working as an Egyptian TV news anchor.

Oraby had her profile raised during the Arab Spring, as she propagated the narrative put forth by President Barack Obama that the uprisings were all about freedom and democracy, said Dr. Mark Christian, a native of Egypt who was raised in a Muslim Brotherhood family in Cairo before he left Islam and moved to America in 2005.

Now Oraby continues to use her social media channels as an instrument for Islamism. In a recent post, she said “Muslims are the food for the nations,” helping to fulfill Muhammad’s prophecy that the global caliphate “will come again.”

“The only reason Oraby is the last one standing is because she lives in the U.S. All those in the Middle East who promoted the Arab Spring were arrested or went into hiding,” Christian said. “But she lives in the U.S. and is enjoying the freedom and the protection of the left in the United States.”

Oraby promoted the presidency of Muslim Brotherhood front man Mohamed Morsi, who assumed power after the fall of secular dictator Hosni Mubarak but did not last long before he was forcibly removed by the Egyptian military.

One can also not help but notice the physical changes of Oraby’s presence in her over the last two years, transforming from a modern woman dressed in Western attire, into a Shariah-compliant Muslima wearing the hijab.

“She uses precious free-speech rights that she sought in a country like the USA to spew hatred and violence towards others,” writes Hany Ghoraba in the report for the . “Generally, Islamists such as Oraby do not believe in freedom of speech except as a tool in Western countries to provoke hatred, propagate Jihadist rhetoric, and fantasize about their Islamist utopia, i.e. Shariah-ruled caliphate.”

“The idea of the Islamic caliphate,” Oraby wrote in a September Facebook post, “is not a political rhetoric but a future that we believe in and a revelation by Allah to his Prophet.”

But for that to happen, Christianity must be severely weakened and Israel destroyed.

That’s why she hates the Copts, says Dr. Christian, who founded the Omaha, Nebraska-based to educate Americans about the Islamist propaganda war being waged on U.S. soil by the Muslim Brotherhood.

“She was one of multiple ladies and men being used to boost the Arab Spring revolutions,” says Christian. “The only thing different about her is she lives in America. She was used by Obama to present the Arab Spring as a freedom movement for democracy and justice. But she has been exposed; it is very clear now where she is coming from. She was pretending to be a freedom speaker, a freedom fighter, but as soon as the mask came off, she went all in for the Muslim Brotherhood and Shariah.”

Christian believes Oraby is the perfect example of how the Brotherhood uses deception to dominate every country where Muslims have a presence.

“If you look at her, you see she is all about the fake democracy movement, fake liberalism, and when the mask came off, she puts on the hijab and we see her real colors,” he said. “It is Islamist to the core, pushed and funded by the left, by the Democrats and the Muslim Brotherhood.”

Christian believes President Trump is making a mistake by not declaring the Muslim Brotherhood a terrorist organization, as promised during his campaign.

But there are Obama holdovers in the Trump administration who have worked against that outcome, he said. And many of these holdovers have been empowered by the president’s national security adviser, Herbert R. McMaster.

“John McCain and others in the Republican Party are also part of the support system for the Muslim Brotherhood, there are lots of those old guards of the Republican establishment staying in the current administration and working within it,” he said. “You listen to her and you can realize right away where she stands and what she is pushing. We have to ask ourselves why she has never been visited by the FBI and asked what she is pushing, the hatred, because what she is doing is kind of on the border of inciting unrest in other countries. Normally someone like that would have been visited by one of the intelligence agencies, and you have to ask why she has not.

“Trump sometimes is naïve about what is happening around him.”