Authorities say the blast occurred after an explosive-laden car driving the wrong way hit three other cars, after initially calling it an accident.
A powerful car-bomb explosion outside a hospital in Egypt’s capital killed at least 20 people and injured dozens more, Egyptian authorities said Monday, in the deadliest terrorist attack in Cairo in more than two years.

Egypt’s Interior Ministry said the blast occurred late Sunday after an explosive-laden car driving the wrong way slammed into three others on Cairo’s Nile Corniche, sparking a chaotic scene of fire and metal as rescuers rushed in, according to footage of the aftermath. Another 47 people were injured, the ministry said.

After initially calling it an accident, the Interior Ministry blamed a domestic insurgent group, Hassm, for the explosion. The group has previously carried out a series of attacks targeting Egyptian security forces.

No group has yet claimed responsibility for Sunday’s attack, which is the deadliest in Cairo since the bombing of a church in December 2016 that killed 29 people, demonstrating how armed militants continue to wage an assault on Egyptian security forces and civilians.

“I would like to express my sincere condolences to the Egyptian people and to the families of the martyrs who were killed in the cowardly terrorist incident in the Qasr Al-Aini area yesterday evening,” Mr. Sisi said.

Mr. Sisi vowed to restore security and stability in Egypt after he came to power in a military coup backed by protests in 2013 that overthrew elected Islamist President Mohammed Morsi. But the military takeover added fuel to a slow-burning Islamist insurgency that continues to this day.

The blast took place in front of Egypt’s National Cancer Institute, where shards of metal and glass lay on the street. The front of the building was damaged, with debris strewn along the length of a city block.

The cancer institute didn’t appear to be the intended target of the bombing, according to the Interior Ministry, which said that militants had been moving the car to another unspecified target.

The health ministry said 54 people were evacuated from inside the cancer institute and transferred to other hospitals. Authorities sent 42 ambulances to deal with the crisis, according to a health ministry spokesman quoted in the state-owned newspaper Al-Ahram.

Images broadcast on Egyptian media showed extensive damage inside the institute, with equipment and furniture strewn inside patients’ rooms. The damage was so extensive that the letters of the organization’s sign dangled from the building.

Egypt has grappled for years with lethal attacks by Islamic State and other extremist groups that have killed hundreds of civilians, police and soldiers.

In May, 14 people were injured when a roadside bomb hit a tourist busnear the Giza Pyramids.

In December 2018, four people were killed in another bombing of a tourist bus near the pyramids.

While the pace of attacks in Cairo and other areas along the Nile has slowed over the past two years, Egypt’s military is engaged in a war with Islamic State militants in the remote North Sinai region, where insurgents have operated for years.

Egypt’s government didn’t declare the blast a terror attack until Monday afternoon, following a day of fervent public speculation about the cause of the blast.

The Egyptian government has faced criticism in the past for how it handles information in the aftermath of attacks and transportation disasters. In 2015 after a Russian airliner crashed in Egypt’s Sinai region killing 224 people, Egypt resisted labeling the incident a terrorist attack until Russia announced that a bomb had brought down the plane.

Photo: People attempt to extinguish a fire after an explosion at the National Cancer Institute.PHOTO: OMAR ZOHEIRY/DPA/ZUMA PRESS 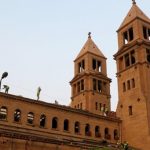