By Egyptian Initiatie for Personal Rights –

EIPR condemns closure of the Naga al-Ghafir church in Sohag by security and documents closure of 22 churches since enactment of the church construction law; demands reopening of closed churches & a decree regularizing the status of all churches that file.

EIPR condemns closure of the Naga al-Ghafir church in Sohag by security and documents closure of 22 churches since enactment of the church construction law; demands reopening of closed churches and a decree regularizing the status of all churches that filed papers with the regularization committee

The Egyptian Initiative for Personal Rights condemns the closure of the Anba Karas Church in Naga al-Ghafir, located in the Sohag governorate, by the security forces. The church was shuttered after dozens of Muslim residents of the village surrounded the church and chanted hostile slogans against Copts; a Christian cleric and another citizen were injured after being assaulted with sticks. The EIPR affirms that the right of worship—whether individually or collectively, in a church, home, or other religious building—is a fundamental right upheld by the Egyptian constitution and international human rights conventions ratified by Egypt. This right is not contingent on the will of the majority.

The EIPR condemns the practice of security agencies closing down churches in which worship services are regularly held, on the grounds that they are not officially licensed. This violates Article 8 of Law 80/2016 on the construction of churches, which provides for the continued functioning of churches and religious buildings even in the absence of the necessary permits or failure to meet the conditions for legal status. It also contradicts a letter sent by the head of the construction and public relations sector in the Ministry of Housing on January 6, 2018 to Father Mikhail Anton, the representative of the Orthodox Coptic confession on the church regularization committee. The housing official stated that 14 governorates had been instructed not to suspend any worship service sin churches that had filed their applications for status with the governorate regularization committees.

The EIPR has documented 32 incidents of sectarian tension and violence since the church construction law went into effect and up to April, all of them associated with worship. Interventions by various state institutions in this period led to the closure of 22 churches and the prohibition of collective worship within them.

“Such attacks are likely to recur and become more frequent in the future, as long as the churchs regulatory committee continues to deal with the applications it has received in a piecemeal fashion,” said Ishak Ibrahim, an officer for freedom of religion and belief in the EIPR. “This fosters a climate ripe for incitement against churches, especially since the pace of application approvals has been extremely slow. The committee is first reviewing the easiest applications, from cities or villages with a high concentration of Christian citizens. It has not taken up the churches located in areas of persistent sectarian tension or those that have witnessed acts of violence or tension.”

The EIPR adds that the recurrent nature of these attacks demonstrates the failure of the law on the construction and renovation of churches to solve the problem that has long plagued Copts in Egypt. In fact, the law closed off avenues by which barriers could previously be circumvented, by example by holding prayer services in a home and later converting it into a church.

The EIPR demands that the Anba Karas Church in Sohag and all closed churches be reopened, particularly during this time of the year of intense Christian religious observance. We also demand accountability for the parties responsible for inciting and inflaming the situation in Naga al-Ghafir, and we reiterate our demand for the issuance of a single decree that would approve the applications of all churches and service buildings that applied for legal status with the regularization committee, without further surveys or bureaucratic measures by other state agencies.

Background to the incident in Naga al-Ghafir, Sohag

Dozens of Muslim residents of Naga al-Ghafir, located in the Akhmim district of the Sohag governorate, surrounded the Anba Karas Church at 4 pm on Friday, April 12, during child Sunday school services. The crowd chanted hostile slogans against the church and threw stones at the building. The protests continued for nearly two hours until security reinforcements arrived. Father Bakhoum Gaballah and Father Basilius Zikri, the priests appointed by the Akhmim diocese to serve the village, were present in the church at the time and were insulted and struck with sticks when exiting the building, in the presence of security forces. Father Basilius and another person, Asaad Bakhit, sustained light injured in the face and head. Security forces escorted the two priests out of the village in a police vehicle.

According to testemonies collected by the EIPR from religious leaders and eyewitnesses, the Akhmim diocese purchased a four-story building, with an area of 80 m2, seven years ago. The first floor is used for worship services, while the other floors are dedicated to various service activities and Sunday schools. Four years ago, the Akhmim diocese registered the building as a civic association, the Father Karas Association, which is licensed to offer social services and organize religious activities and designate the first floor of the building as a church.

The church then purchased the adjacent building, with an area of 75 m2, and two months ago began building additional floors on it, while joining it to the church building and removing the dividing walls between them. The church filed an application with the church regularization committee pursuant to the church construction law, including the architectural plans for the two buildings and their land parcels.

The village was tense on the day leading to the attack. The village mayor had objected to the construction of the fourth-floor roof and the joining of the two structures, and he contacted officials with the Naida local municipal unit, to which Naga al-Ghafir is subordinate. Officials came and confiscated the construction materials and the steel and cement located on site, and they placed security guards on the building.

Homeland Security officials in the governorate summoned Father Bakhoum on Friday evening to take his statement. They informed him that the building would be shut down and all worship and other services prohibited due to the tense climate in the village. None of the people who surrounded the church were arrested.

For more information about sectarian tension and violence in connection with worship and the regularization of churches, see: 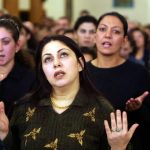 The Next Big Threat to Iraq’s ChristiansSelected Opinion 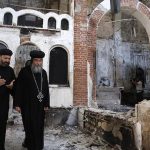