The Donald Trump administration is releasing another $195 million in military assistance to Egypt after unblocking an identical amount last month, Al-Monitor has learned.

Secretary of State Mike Pompeo notified Congress last week about the administration’s decision to override congressional aid restrictions on national security grounds. The notification is required by annual spending legislation that freezes 15% of the annual $1.3 billion military aid budget for Egypt absent progress on human rights and other issues, unless the administration justifies waiving the restriction.

Pompeo’s waiver, which impacts fiscal year 2017 money, comes in spite of mounting concerns on Capitol Hill over Cairo’s errant bombing of a US citizen, its military relationship with North Korea and perennial human rights concerns. Pompeo released another $195 million in military aid held over from fiscal year 2016 last month.

An aide to Sen. Patrick Leahy, D-Vt., the top Democrat on the Senate Appropriations Committee, told Al-Monitor that “the Egyptians clearly haven’t met the human rights conditions in the law” and called Pompeo’s waiver “regrettable.”

“After winning re-election by locking up the opposition, President [Abdel Fattah] al-Sisi has intensified his crackdown on civil society,” said the aide. “Sen. Leahy believes the administration should have used the leverage Congress provided in a manner that reaffirmed the US commitment to fundamental rights.”

Al-Monitor first reported in May that Leahy has placed a separate $105 million hold on Egyptian military aid over Sisi’s human rights record and the grievous injuries sustained by US citizen April Corley when Egyptian forces mistakenly bombed a group of tourists in the western desert. That hold remains in place.

While the Leahy aide acknowledged some progress regarding Egypt’s restrictions on nongovernmental organizations and its military cooperation with North Korea, the aide also noted that it is “not fully to the point where [Leahy] and others in Congress felt it was time to lift” the fiscal year 2016 hold either.

When Pompeo released the first $195 million slice last month, a State Department official told Al-Monitor that Egypt had “made progress downgrading its relationship” with North Korea but referred Al-Monitor to the Egyptian government for specifics. The Egyptian Embassy in Washington did not respond to a request for comment.

Sisi generated bipartisan outrage in Congress last year when he ratified a law intended to crack down on NGO and civil society activity in Egypt, a move lawmakers called “draconian.” And although Egypt annulled prison sentences for 16 NGO workers in April, they must still stand retrial.

“Secretaries of State [Hillary] Clinton, [John] Kerry and [Rex] Tillerson made the same shortsighted move,” Hawthorne told Al-Monitor. “What’s different now is that Pompeo, thus far, has not uttered even a single public word of criticism of the truly alarming human rights situation inside Egypt, which rivals Iran’s cruelty.”

Congress has included human rights and democracy restrictions on Foreign Military Financing (FMF) to Egypt since shortly after the 2011 Arab Spring protests that toppled then-President Hosni Mubarak. Cairo receives $1.3 billion in FMF every year, making it the largest recipient of US military aid after Israel. Under the FMF program, the federal government pays US defense contractors to make weapons for Egypt.

Egypt’s presidential election earlier this year prompted further concern in Congress after the Sisi government arrested and harassed potential competitors. Sisi won with 97% of the vote after only facing token opposition from Moussa Mostafa Moussa, the self-professed pro-Sisi leader of the El Ghad Party.

Days before the election, a group of Egyptian Americans descended on Capitol Hill to push for conditions on Egyptian military aid and a Senate resolution. The resolution, authored by Senate Foreign Relations Committee members Marco Rubio, R-Fla., and Bob Menendez, D-.N.J., expressed “concern regarding the intimidation and detention of credible opposition candidates, as well as the restrictive environment for nongovernmental organizations and media.” The Senate has yet to act on the resolution even though the elections wrapped up in March.

While Senate appropriators have attempted to cut Egyptian military aid by $300 million in recent years, their efforts have been stymied by their House counterparts, who frequently praise Cairo for its counterterrorism policies and cooperation with Israel. Still, lawmakers agreed to increase Egypt’s annual FMF withholding from $195 million to $300 million in a fiscal year 2018 spending bill that Trump signed into law in March. 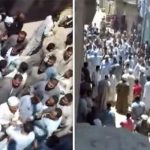