Senator Rubio was unable to join Coptic Solidarity’s 8th Annual Policy Day last week, but sent this statement in support of our cause.

While Egypt plays a critical role in the Middle East and is a vital counterterrorism partner, the United States should not hesitate to speak candidly when there are concerns.  The Egyptian government must make progress on human rights, religious freedom, democracy, and economic reforms.   Recent terrorist attacks—such as the horrific shooting of Coptic Christians on a bus in central Egypt in May and the PalmSunday suicide attacks against peaceful worshipers in April—are grim reminders of the growing threats that this ancient faith community, which dates back to the Apostle Mark, is facing today.  As Christians and other religious minorities are being targeted with discrimination, persecution and even murder throughout the Middle East, confronting these threats should be at the forefront of our foreign policy. 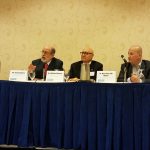