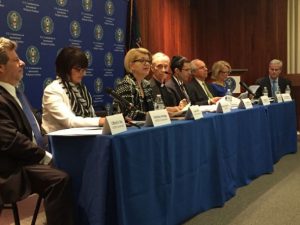 Commissioners with the United States Commission on International Religious Freedom participate in a discussion about the commission’s 2017 annual report released in April on May 17, 2017 at the Government Publishing Office in Washington, D.C.

During a question-and-answer session, the commissioners were pressed on why the commission is no longer calling on the State Department to designated Iraq and Egypt as “countries of particular concern.” According to the term’s definition under the International Religious Freedom Act, the CPC designation refers countries that have “engaged in or tolerated systematic, ongoing and egregious violations of religious freedom.”

In years past, USCIRF has recommended both countries for the CPC designation, which is a tool that allows for the U.S. government to begin employing non-economic policy options designed to curb religious freedom violations in the country. This year, USCIRF included both Egypt and Iraq on its list of Tier 2 countries, which identifies countries where there are religious freedom issues but government actions or inaction aren’t serious enough to warrant a CPC label.

Considering that fact that the Islamic State has committed genocide and controls territory in Iraq and the fact that the USCIRF report came in the weeks after a number of Egyptian churches had been bombed and Egyptian Christians had been killed in recent months, religious freedom advocates — like author and evangelical Trump advisor Johnnie Moore — were concerned when they read USCIRF report on April 26.

Commissioner Sandra Jolley, a longtime religious freedom advocate who was appointed to the commission by former Sen. Minority Leader Harry Reid, D-Nev., in 2016, travelled to Egypt earlier this year with a USCIRF delegation and met with Coptic leaders. She was posed a question during the discussion about Egypt’s designation in the report, which was released just weeks after Coptic Churches were bombed on Palm Sunday.

“Egypt was a tough decision, really one of the toughest,” Jolley said, adding that the reporting period for the 2017 report was from February 2016 to February 2017, before the Palm Sunday bombings happened.

“Issues of religious freedom are a subset of the larger issue of human rights. It is entirely possible that a country can be moving forward in addressing issues of religious freedom and at the same time, be extremely problematic in terms of other human rights abuses. This is the situation that we found in Egypt,” Jolley continued. “[President Abdel Fattah] el-Sisi’s government has made very public and very symbolic gestures of engagement, particularly with the Coptic Church.”

Although some critics might argue that Sisi’s gestures to the Coptic community, one of which included attending a Coptic Christmas service in 2015, are just for show or symbolism, Jolley reasoned that “symbolism” can go a long way in a country like Egypt.

“Symbolism can be extremely powerful especially when it is followed up with further engagement with the religious minorities, restoring and repairing their churches, going to their worship services. That’s meaningful,” she said. “I will say this also that we met with a wide variety of government, religious, civil rights and civil society people and everyone shared with us their feeling that the needle has moved in their direction. We felt like this needed to be encouraged and recognized.”

“Are there serious issues of religious freedom? Yes, there are,” Jolley added. “But we felt, in looking at documents and our experience, that Egypt no longer fit in the IRFA definition of CPC.”

Although some were surprised to see Iraq was not recommended as a CPC, the Frank Wolf International Religious Freedom Act passed by Congress last year created an entirely new designation highlighting “entities of particular concern” (EPC) and allows USCIRF to formally identify non-state actors and terrorist groups like the Islamic State and Al-Shabaab.

Considering that the USCIRF report recommends that the State Department list the Islamic State as an EPC, USCIRF Vice Chair Daniel Mark, an assistant professor of political science at Villanova University appointed to the commission by Speaker of the House Paul Ryan, told The Christian Post after the discussion that the creation of the EPC designation played a role in allowing the commission to refrain from recommending Iraq be labeled as a CPC.

“The trends the we have been noticing in Iraq are not entirely brand new this year. But for example, when you had this discussion last year, one of the things we looked at was, ‘Gosh, how could we possibly demote Iraq in the year of ISIS?'” Mark said. “We were one of the people who asked Congress to create this category, not only so that we could promote a country, but also because there are groups that we need to shed light on. The tools we had with the CPC designation didn’t quite allow that.”

“I think that had we not been able to say ISIS is an EPC, it would have been much harder for us to take [Iraq] down,” Mark continued, adding that he wasn’t speaking on behalf of other members of the commission. “It kind of seemed to us that the Iraqi government wasn’t quite [on the CPC level] anymore but it would have been so hard to do if we couldn’t have sent a loud and clear message that ISIS is one of the worst in the world.”

In the discussion, Commissioner Clifford May, the founder of the Foundation for Defense of Democracies, explained that the decision to remove Iraq from its CPC recommendation list was based on the “belief” that the Iraqi government and the Kurdish authorities “recognize the problem and are attempting in a serious way to address it.”

May added that the Iraqi government will to be re-examined for the 2018 report.

“A lot of times what we try to do here is not judge whether the glass is half full but whether it is spilling or leaking at this point,” May said. 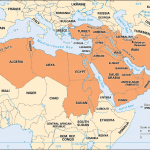 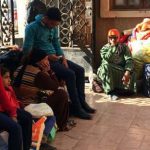