“Sisi is really offering something very big to Copts for the first time through a military funeral, but it is a compliment flavored with contempt”

“Pain is not about crying and screaming, but it is in the heart. Turn your pain, tears and emotions to prayer,” Pope Tawadros said during the commemoration service of the victims of Sunday’s bombing of a church attached to Cairo’s main Coptic cathedral killing at least 20 people and leaving scores injured.

Several key government figures and representatives from the Coptic Church were in attendance at the service presided over by Pope Tawadros II on Monday, at the Virgin Mary and St. Athanasius Church in Nasr City on Monday before a military funeral at the site of the Tomb of the Unknown Solider in Nasr City.

“I hope in the next steps, while moving to the memorial,” the pope went on to say, “to keep everything organized and preserve the dignity of those who died. Do not forget that this is all on air to the entire world. Our image should glow — the image of the believer who prays to God.”

The Coptic Orthodox Church had announced earlier that the attendance of the service would be by invitation only, and limited to the immediate families of the victims. This prevented the participation of hundreds in the service including many relatives. Security forces set up barricades at the entrances to the streets leading to St. Mary and St. Athanasius Church, to rebuff those attempting to approach the church.

Those unable to enter gathered in front of the church surrounded by police forces, raising their hands to the sky and chanting “Oh God!” The atmosphere was one of anger with several people engaged in verbal altercations with the security forces surrounding them. Some insisted on their right to attend the service, while others blamed the Interior Ministry for their inability to protect the church from bombings such as these.

The police responded by beating them with batons and making some arrests. They were released later in the day, according to rights lawyer Sameh Samir.

Zaky explains that the anger that was sparked by the church’s Sunday announcement that attendance at the service would be by invitation only.

“It has never happened that attending anything in church is through invitation, with the exception of Christmas,” he says. “The idea that a service is held that is invitation-only is very demeaning. There were relatives who could not attend.”

Zaky believes that holding the mass away from the site of the bombing and the main Cathedral, which is usually the meeting point for Christians after any major events given the fact that it is the main headquarters of the Coptic Church, is strange and unconventional. He suggests that the move was made to encourage the erasure of the memory of what happened on Sunday in the minds of those in attendance.

The bodies were taken out of the church in ambulances flanked by Central Security Forces and army vehicles, as well as leaders from the Armed Forces and the police.

After the bodies were out of the church, several people wanting to join the funeral made an attempt to cross the barriers set up by the security forces behind which were military tanks with armed personnel on top. A couple of hundred had gathered when a military tank blocked the road. People were beaten back with batons and the street was cordoned off.

The protesters stood in front of the tank and chanted, “With our souls and blood, we sacrifice ourselves for you, oh Cross!”

Compelled to navigate side streets, many of them blocked off, several people managed to join the procession. Hundreds accompanied the victims’ bodies in its way to the Tomb of the Unknown Soldier, chanting some Christian hymns and chants against terrorism. One general, angered by the chants although they carried on criticism of the state, shouted at the crowd exclaiming that this was not acceptable before calling on journalists with cameras to stop filming.

Family members, mourners and protesters were only able to participate in this part of the funeral as they were soon prevented from nearing the memorial site where only one family member of each victim was allowed to enter.

When security blocked Youssef Abbas Street, close to the Tomb of the Unknown Soldier, the crowd responded with chants of “Open, Sisi.”

Some of the ambulances took a surprise u-turn and took the opposite direction in an attempt to avoid the crowds. Some desperately threw themselves in front of the remainder of the ambulances, while others tried to run to catch up them. They quickly lost hope as frustration and desperation took over with many falling on the floor, crying and wailing.

After security forces succeeded in preventing the crowds from advancing, the memorial started with only church and political leaders in attendance, in addition to one family member of each victim.

Leftist activist Akram Ismail who was among those gathered in front of the church says that that state leadership was keen on making it a military funeral, not a popular one, largely due to the fear of having so many mourners in one place amid the rising anger.

He believes that the leadership was afraid to the anti-state chants and possible escalation, adding that the state’s biggest concern was “to cover up the embarrassment left by the bombing by showing a glowing military scene.”

“People will support a leadership that has true achievements, but Sisi is unable to do that,” Ismail adds. “That’s why he was protected with the soldiers and the church leadership, even if it meant that the families of the victims are beaten with with batons.”

Holding a military funeral for Coptic victims is an important development that pleased church leaders, Ismail says, but the way that the way the funeral was handled angered many Copts.

“Sisi is really offering something very big to Copts for the first time through a military funeral, but it is a compliment flavored with contempt.” 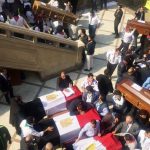 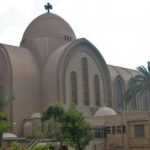