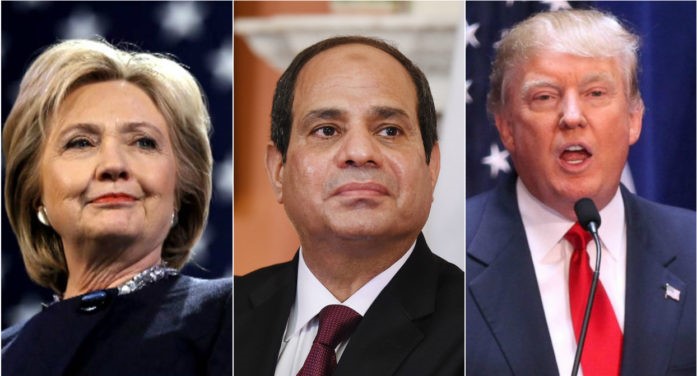 Donald Trump would back Egypt’s ban on the Muslim Brotherhood while Hillary Clinton would undermine the country’s efforts to dismantle the group, members of an Egyptian delegation to the United Nations said on Sept. 21.

One member of the delegation, Sahar Talaat Moustafa, the head of Egypt’s Tourism and Civil Aviation Committee told Breitbart that “a lot of people in Egypt feel she (Clinton) is in support of the Brotherhood. Actually, a majority of people think so.”

The Egyptian delegation interviews came as Egyptian President Abdul Fatah Sisi, in an interview with CNN, said that he has “no doubt” that Trump would make a strong leader.

El-Sisi also responded to a clip of Hillary Clinton accusing the Egyptian government of being “basically an army dictatorship,” during a debate with Vermont Senator Bernie Sanders. Sisi said, in part, that “in Egypt there will not be a chance for any dictatorship because in Egypt there is a constitution, there is law, and there is the will of the people which will refuse to allow any leader to stay in his position for any period longer than his term which is four years.”

The Chief Executive Officer of the Egyptian Chamber of Media Industry, Amr Fathy, took issue with Hillary Clinton’s claims that Sisi is a dictator. “The signs you take as dictatorship is not dictatorship,” Fathy told Breitbart News, adding that Sisi “is our president and we are behind him.”

“The Egyptian authorities they have already dealt with Hillary before; we did not deal with Trump,” Fathy explained about the meetings in New York this week between Sisi and the American presidential candidates. “So, maybe we know now much more and have a better idea about Mr. Trump in specific.”

When asked about the coziness between Clinton and the Muslim Brotherhood, Fathy showed just how damaging the Obama foreign policy directed by Hillary Clinton and her successor at the State Department, John Kerry, has been to America’s standing in the eye’s of the Egyptians.

Gad said that Sisi’s background as a general should not be taken to mean he is somehow running a “military dictatorship” as Hillary Clinton claimed.

“Yes, Sisi has a military background but he saved Egypt,” Gad said. “He restored the Egyptian identity.”

The votes are in: Members of Egyptian delegation to UN are Trump supporters