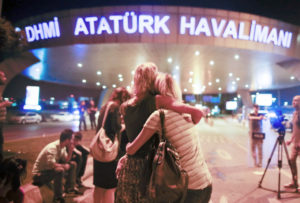 Passengers embrace each other at the entrance to Istanbul’s Ataturk airport, early Wednesday, June 29, 2016 following their evacuation after a blast. (AP Photo/Emrah Gurel)

Islamic State of Iraq and Levant (ISIL), which promised to unleash mass casualty attacks during the holy month of Ramadan, is suspected of carrying out terror strikes in Turkey, Yemen and Lebanon over a two-day period that left at least 89 people dead and wounded hundreds more.

Turkish officials say their initial investigations point to ISIL in the triple suicide bombing and gun attack at Istanbul’s Ataturk international airport on June 28 which killed at least 41 people.

Another 239 people were injured, many seriously, after three gunmen armed with AK-47s opened fire on passengers.

In Yemen, four bomb attacks killed 43 people at security checkpoints in Mukalla on June 27. Reports say ISIL jihadists struck at sunset as Yemeni soldiers broke their fast during the holy month of Ramadan.

At least 38 of those killed in the attack were soldiers and another 24 people, including children, were injured in the blasts.

A local journalist told Al Jazeera that the attackers posed as distributors for Iftar, the meal that breaks the daily fast.

In Lebanon, also on June 27, suspected ISIL suicide bombers attacked the predominantly Christian village of Qaa, killing at least five people, according to reports. Qaa is near the border with Syria’s Homs district.

Two separate sets of four suicide bombers were reported. The first attack killed five people in addition to the bombers. About 30 people were injured in the two attacks, the second of which occurred near St. Elias Melkite Catholic Church as mourners were preparing for the funerals of the people killed in the first bombing.

Meanwhile, Algerian security services reported foiling an attempt by ISIL-linked jihadists to attack a shopping mall in the eastern city of Setif, a government newspaper reported on June 29.

The report said a group of jihadists linked to active ISIL cells in Libya planned to attack the Park Mall in Setif, which attracts some 40,000 visitors a year. The plot was uncovered after eight members of the cell were killed in a May 31 firefight with the Algerian army near Guelta Zerka, 60 kilometers (25 miles) east of Setif.

In Turkey, Prime Minister Binali Yildirim said so all indications pointed to ISIL being behind the attack in Istanbul. He said the terrorists arrived at the airport in a taxi, and were able to launch the attack without going through security checks.

“This (attack) has shown once again that terrorism is a global threat,” he said. “This is a heinous planned attack that targeted innocent people.”

“The findings of our security forces point at the Daesh (ISIL) organization as the perpetrators of this terror attack,” Yildirim told reporters at the airport.

In the U.S., Secretary of State John Kerry was slammed for his assessment that ISIL is launching such attacks out of “desperation” due to its loss of territory in Syria and Iraq.

“Now, yes, you can bomb an airport, you can blow yourself up. That’s the tragedy,” Kerry said. “Daesh and others like it know that we have to get it right 24/7/365. They have to get it right for ten minutes or one hour. So it’s a very different scale. And if you’re desperate and if you know you’re losing, and you know you want to give up your life, then obviously you can do some harm.”

“They’ve said they’re on the run for many years, and they’re not,” McCaul told Fox News on June 29. “I think the airstrikes have ramped up external operations … This is an unprecedented pace of terror in modern times. And so to say they’re on the run … absolutely defies reality.”

Earlier this month, CIA Director John Brennan testified on Capitol Hill that despite progress against ISIL on the battlefield, “our efforts have not reduced the group’s terrorism capability and global reach.”

He described the terror group as “resilient” and said they will wage their terror campaign globally in response.

“The group’s foreign branches and global networks can help preserve its capacity for terrorism regardless of events in Iraq and Syria,” Brennan said. “In fact, as the pressure mounts on ISIL, we judge that it will intensify its global terror campaign to maintain its dominance of the global terrorism agenda.” 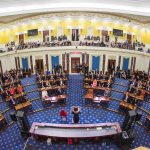