Coptic Solidarity’s 7th Annual Conference in Washington, D.C. entitled The Future of Egypt’s Religious Minorities: Status of Copts after Two Revolutions affirmed the pressing need to protect the rights of the largest Christian minority in the Middle East, and the rights of aggrieved minority communities in the region as a whole.

The Conference highlighted the range of institutionalized, long-standing discriminatory practices targeting Copts, as well the shocking lynching of an elderly Christian woman, Soad Thabet, that laid bare the depth to which regressive Islamism has penetrated into Egyptian society, under the complacent eyes of the authorities. While recognizing positive rhetoric and symbolic acts by Egyptian authorities toward the Coptic community and against the worst forms of Islamism, openly-discriminatory rules, such as the “anti-blasphemy” law, restrictions on church building and designation of religion on state identification cards, as well as the de facto exclusion of Copts from senior state positions, the use of informal reconciliation sessions to circumvent the application of law in acts of sectarian violence against Copts, the conflation of the state with Islam and a culture that educates and encourages treatment of Copts as outsiders in their own land, continue to firmly designate Egypt’s Christians as second class citizens. The situation with Christian and other minority communities in much of the region is even more alarming, so much so that the United States and other countries rightly have formally designated what has been occurring as acts of genocide.

Coptic Solidarity announced its new initiative, Maspero Remembrance Day, marking the upcoming fifth anniversary of the murder of 28 peaceful protestors on October 9, 2011. More details and resources will be released shortly to assist with communities wishing to join in these commemorative efforts. Coptic Solidarity affirms the critical need for justice to be served in Maspero, to ensure all citizens have equal protection of the law and that the law is applied equally and fairly to all citizens regardless of their creed. 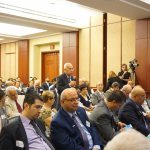