By Office of Senator Marco Rubio –
For Immediate Release

Washington, D.C. – U.S. Senator Marco Rubio (R-FL) today introduced a bill which would give the State Department new tools to support the promotion of international religious freedom globally and counter the spread of violent extremism. The Frank Wolf International Religious Freedom Act will upgrade the International Religious Freedom Act of 1998 to better address growing violations of religious freedom around the world today.

“Religious freedom has rightly been called America’s first freedom and must be given priority in our foreign policy agenda. This legislation brings the historic International Religious Freedom Act into the 21st century by giving this administration and future administrations the tools needed to defend this most basic human right,” said Rubio. “People of faith around the world routinely find themselves in the crosshairs, not only of repressive and authoritarian states, but also of non-state actors like ISIL and Boko Haram. Wherever assaults on religious freedom occur, America has a moral responsibility to speak up and to act.

“Congressman Smith has been a stalwart defender of the persecuted and repressed around the world and I am pleased to partner with him in advancing this critical legislation in the Senate,” Rubio added.

• Create a “Special Watch List” and automatic downgrade to a Country of Particular Concern (CPC) for states on the list for three straight years.

• Require designation of non-state actors as “Entities of Particular Concern.”

• Direct the President to focus sanctions on individuals who carry out or order religious restrictions.

• Set a floor at 25 full-time employees in the International Religious Freedom Office.

• Require curriculum for training all Foreign Service Officers in the “strategic value of international religious freedom.”

• Prioritize IRF programming for groups that seek to strengthen investigations, reporting, and monitoring of religious freedom violations, including genocide.

The legislation is the companion legislation to the amended text of H.R. 1150, introduced by Representative Chris Smith (R-NJ), that emerged from a House Foreign Affairs Committee mark-up last week—the only modification is the addition of language prioritizing programming aimed at investigations and monitoring of religious freedom violations to include genocide perpetrated against religious minorities. 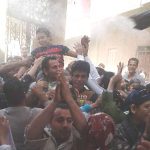