During a recent conference in Amman, Jordan, titled “Toward a Complete Strategy to Combat Extremism,” hosted by the Jerusalem Center for Political Studies. While presenting, Dr. Hena al-Kaldani, a Christian, said that “there is a complete cancelation of Arab Christian history in the pre-Islamic era” and “many historical mistakes” in the school curriculums of Jordan.

Al-Kaldani asserted that “there are unjustifiable historic leaps in our Jordanian curriculum,” meaning that centuries’ worth of Christian history is bypassed or suppressed. By way of example, he said that “10th grade textbooks omit any mention of any Christian or church history in the region.” Textbooks completely ignore historic Christian figures of importance and make no mention of Jerusalem’s Christian sites, while giving detailed accounts about Islamic sites, he added. That the original inhabitants of Petra, the Nabateans, were once pagans who converted to Christianity is also omitted.

Wherever Christianity is mentioned, omissions and mischaracterizations proliferate. One Arabic language textbook uses the phrase, “Man shall not live by bread alone” without attributing it to Christ or the Bible. Christianity is primarily mentioned as a Western (that is, “foreign”) source of colonization, said al-Kaldani.

Christian minorities throughout the Middle East—not just in Jordan—have long maintained that the history taught in public classrooms habitually suppresses the region’s Christian heritage while magnifying (including by lying about) Islam. 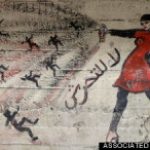