Government policies restricting the construction and renovation of churches in Egypt pose a major health and safety issue, advocates claim.

Human rights advocates and public figures are calling on the Egyptian government to reform “discriminatory” laws restricting the building of churches in Egypt, which they say contributed to a fire at a Coptic Orthodox church that killed 41 people, including 18 children, last Sunday.

At least 14 others sustained injuries in the incident, which occurred during morning mass at the Abu Sefein Church in Imbaba, west of downtown Cairo. According to the interior ministry, an electrical malfunction caused the fire.

Videos on social media have depicted scenes of grief as hundreds of mourners gathered in a nearby church, sobbing as baby coffins made their way through the crowds during the funeral.

In one family, a man lost his wife alongside their five-year-old twin girls, three-year-old son, and the children’s grandmother and aunt. Another family lost their 13-year-old twins. A priest was also among those who died.

Refaat says the deeply religious community is searching for answers – and looking for miracles or signs to give them peace amid their grief.

“I have the belief that God has a reason for everything, so let us wait and see what God’s reason is,” Refaat said.

On Tuesday, a fire broke out in another church in the governorate of Minya in Upper Egypt due to an electrical short circuit. While there were no casualties, it is the latest in a string of fires in Coptic churches, which some say indicates imminent health and safety issues.

The Ministry of Health attributed the cause of the Imbaba fire victims’ death to asphyxiation.

Amr Magdi, a senior researcher with Human Rights Watch’s Middle East and North Africa division, said the organisation is “concerned that we will see more victims of unsafe conditions [in places of worship]”.

According to Magdi, this is a result of systemic discrimination against Christians in Egypt, which is “deep and pervasive”, leading to an environment of “extreme fear and intimidation”.

Many churches are currently modifying these ad hoc structures, ranging from homes to factories in narrow alleyways, to make them fit for purpose. Still, the legacy of discriminatory policies poses a risk.

In 2016, the Egyptian government introduced a new law to govern the building of churches, which shifted the decision-making from the president to local governors. However, the law, which only applies to Christian houses of worship, has stringent requirements for churches to qualify for permits. There is no appeals process in cases of rejected permits.

Human Rights Watch previously blasted the law for “sending a message that Christians can be attacked with impunity”, saying it creates systemic issues for the minority group. Copts, who account for approximately 10 percent of the country’s population, have been subject to mob violence and terror attacks in previous years.

“Egyptian authorities should amend the church building law of 2016 to remove all discriminatory restrictions,” Magdi said. “Ideally, the government should draft a common law for worship houses for all – Muslims, Christians, and beyond.”

Magdi, who has been documenting injustices against minority religious groups and sects in Egypt, including Coptic Christians, Bahais, and Shia Muslims, said: “Egyptian authorities have never been sincere about granting the right to freedom of belief and religious rituals to its citizens equally and unequivocally.”

Since the introduction of the new law in 2016, existing ad hoc churches have requested approximately 5,400 building permits to legitimise their places of worship. Nearly 2,400 permits have been issued so far, accounting for only 45 percent of applications.

According to the Egyptian Initiative for Personal Rights, the government entity responsible for issuing permits, known as the Higher Committee for Church Building, lacks transparency regarding its standards or timelines.

An Egyptian government spokesperson was not available to comment for this story. However, in an official statement earlier this year, the government said it “spares no effort to … [promote] the values ​​of tolerance, belonging, acceptance of others, and coexistence” among Christians and Muslims.

The Egyptian government has outlined its process for the approval of church permits and stated that religious freedom in Egypt is improving, partly due to the government’s efforts to register unlicensed churches.

Archbishop Angaelos agreed, saying religious freedom was moving in a “very positive direction” and that the Coptic Orthodox Church had been granted more permits in recent years than they had in decades prior.

While Angaelos believes the Imbaba fire is an isolated incident, he says churches must ensure their places of worship are safe and that the state must share the responsibility of upholding public safety.

Despite official claims from authorities that emergency services arrived within two minutes of receiving emergency calls, witnesses have expressed outrage at their response, which they say took at least 90 minutes to arrive at the burning church.

“That’s unacceptable anywhere in the world,” Angaelos said. “Whether this is an isolated occurrence that people need to look into or whether it’s a more systemic problem, that needs to be considered.”

Photo: Coptic mourners attend the funeral of victims killed in a fire at the church of the Blessed Virgin Mary in Egypt’s Giza Governorate on August 14, 2022 [File: Khaled Desouki/AFP] 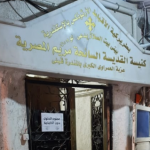 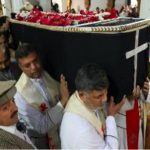