Editor’s note: In this report by CNN, as well as many others by Western media, the identity of the victims as “Christians” is never mentioned..

Lagos, Nigeria – At least 81 people were killed in an attack on a village by suspected Boko Haram militants in northeast Nigeria, the Borno state government said in a statement released to CNN Wednesday.

Residents said the men attacked the village in armored tanks and trucks filled with guns, according to the government’s statement.
Seven people, including the village head, children and women, were abducted from the Faduma Kolomdi community, described as a nomadic town in northern Borno.
Residents reported that the men gathered the villagers on Tuesday morning and started shooting in the incident which lasted several hours. 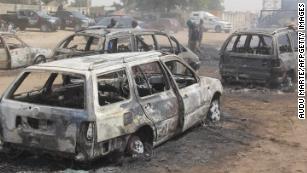 These vehicles got caught between roadblocks during Boko Haram massacre
One of the villagers who survived the onslaught told the authorities that the attackers came under the cover of being Islamic teachers.
“They gathered us and said they wanted to deliver religious sermon to us. They asked us to submit whatever arm we had. Some villagers gave up their … guns, bow, and arrows.
“Suddenly, they started shooting at will. Even children and women were not spared, Many were shot at close range,” the man, who was not named, said in the statement.
“We have buried 49 corpses here while another 32 corpses were taken away by families from the villages around us.
“The insurgents abducted seven persons, including our village head. They went away with 400 cattle,” the man added.

Tuesday’s attack involving women and children was carried out by Boko Haram and ISWAP, or Islamic State West Africa Province, members operating terrorist sleeper cells in communities in the area, Nigeria military spokesman Sagir Musa said in a statement.
A large number of troops have also been sent to the area to bolster the military’s response to the attack, the army said.
“The Nigerian Army is committed to investigating the circumstances of these callous attacks by desperate Boko Haram criminals and the bandits on innocent civilians,” Musa said.
The villagers accounts were corroborated by former district head Zanna Gubio who told CNN he transported some of the victims to the hospital with his vehicle.
He said the attacks happened on Tuesday morning when some of the herders were feeding their cattle and the militants summoned them from the fields.”My people were feeding their cattle when Boko Haram ask them to gather together, and then they started shooting them, they burial lasted for the whole night to the early hours of this morning,” he added. 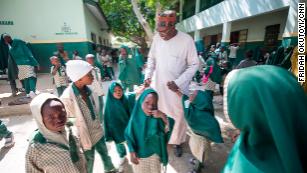 Children displaced in the Boko Haram conflict are on a path to success thanks to a school prioritizing peace
Borno state governor Babagana Zulum visited the village on Wednesday and called on the Nigerian army to strengthen its operations to put an end to the militants’ onslaught on border communities in the state.
Tens of thousands of people have been killed and more than 3 million people have been displaced during the more than a decade-long Boko Haram insurgency in Nigeria’s northeast.
The group’s fighters have unleashed carnage, burning mosques, communities and attacking military outposts in the region.
More than 30 travelers were killed when Boko Haram militants set fire to vehicles at a roadblock in Auno town in Borno state in February.
________________________
https://edition.cnn.com/2020/06/10/africa/boko-haram-faduma-attack/index.html 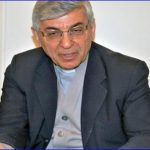 The Plight of Christians in IranNews & Reports 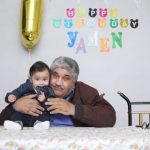 Journalists arrested in Egypt amid crackdown on press freedomsNews & Reports