By
Posted June 10, 2020
In News & Reports
Palestinian Historian: Islam, Not China, Is Fit To Lead The World After America’s Collapse; Germany And France Will Become Islamic Republics Within A Decade2020-06-102020-06-10https://www.copticsolidarity.org/wp-content/uploads/2015/11/Logo-e1447995418310.pngCoptic Solidarityhttps://www.copticsolidarity.org/wp-content/uploads/2020/06/palestinian_historian_islam_will_lead_world_after_us_fall_memri.png200px200px
0
0

Palestinian historian Ghassan Weshah said in a June 6, 2020 interview on Al-Aqsa TV (Hamas – Gaza) that America and its slogan of liberty are collapsing and that Islam is the only power that can lead the world after America, since China is unfit for this. He added that the world has become repulsed by the Chinese “eating anything that moves”. Weshah also cited “scientific studies” that he claimed that Germany and France will become Islamic republics within 10 years.

Ghassan Weshah: “The future belongs to us, to our people, and to the Arab and Islamic nation. This is what the scientific studies say. They say that the United States is collapsing and that Islam is the only power that is fit to lead the world after America. Islam! 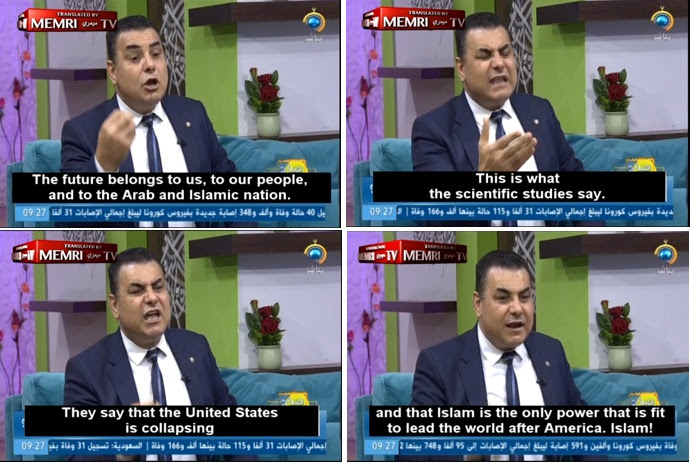 “China is incapable of doing it and the people who herald the theory that China will lead the world know that it cannot. When China was the strongest superpower in the world, it built the Great Wall of China. Do you see how Chinese culture is? Their culture is directed inward. They cocoon themselves. Tell me of a single place China conquered throughout history? [Not even] 10 square centimeters. To this day, parts of China are under Japanese occupation. Such a culture cannot… When you lead the world, you are leading it from a cultural and military perspective. You need to lead it in terms of culture and knowledge. Today, the U.S. leads the world with a false culture and it has begun to collapse. American’s slogan of liberty is collapsing at its first test. [The coronavirus pandemic] was a big embarrassment for China and a large part of the world is repelled by the Chinese culture and about how they eat anything that moves. These people are unfit to lead the world. Out entire nation needs to see the scientific research that is coming out of Europe.”

Interviewer: “What does it say?” 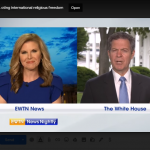 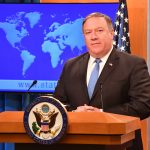 Secretary Michael R. Pompeo at a Press Availability on the Release of the 2019 International Religious Freedom ReportNews & Reports