Asia Bibi, a Pakistani Christian woman freed from death row last year has arrived in Canada, according to her lawyer, Saif Ul Malook.

Bibi, a mother of five from Punjab province, was taken out of the country after repeated death threats from religious extremists in Pakistan, following the quashing of her conviction for blasphemy.
She has been separated from her family and living in safe houses since the 2018 overturning of the sentence. Her children are already in Canada.

Bibi was convicted in 2010 and sentenced to hang after she was accused of defiling the name of the Prophet Mohammed during an argument a year earlier with Muslim colleagues.

The workers had refused to drink from a bucket of water Bibi had touched because she was not
Muslim. At the time, Bibi said the case was a matter of women who didn’t like her “taking revenge.”

Under Pakistan’s penal code, the offense of blasphemy is punishable by death or life imprisonment. Widely criticized by international human rights groups, the law has been used disproportionately against minority religious groups in the country and to go after critics of the Pakistani religious establishment.

Violent protests
Last year, she won her appeal against the conviction and death sentence sparking widespread protests throughout Pakistan.

Before her conviction was overturned, the Islamist movement Tehreek-e-Labbaik (TLP) had previously vowed to take to the streets if Bibi were released, and large protests broke out in Islamabad and Lahore soon after the ruling was announced.

The group went on the rampage when Bibi was acquitted in 2018, with protesters jamming into cities, attacking public property and burning cars.

Pakistani Islamists react after the police use tear gas during a protest against the Supreme Court decision on Asia Bibi’s case. 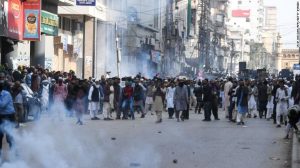 Pakistani Islamists react after the police use tear gas during a protest against the Supreme Court decision on Asia Bibi’s case.

At the time, the leader of Pakistan’s far-right Islamist Tehreek-e-Labbaik movement and dozens of his supporters were placed into “protective custody,” with a government spokesman saying the arrests were aimed at preventing protests from going ahead out of fear for public safety.

The TLP were later subdued through a deal reached between the Pakistani government and the group — with the government agreeing not to oppose a review petition filed against the Supreme Court’s judgment.

“Even if there was some grain of truth in the allegations leveled in this case against the appellant still the glaring contradictions in the evidence of the prosecution highlighted above clearly show that the truth in this case had been mixed with a lot which was untrue,” the ruling said.

Earlier this year, the country’s Supreme Court said her case would not be retried, as judges rejected a petition to review their previous decision.

Judges were dismissive of the case against Bibi in the petition to have her case retried, saying the crime had not been established and listing inconsistencies in witness testimonies.

“We are not hearing the case again, the lawyer was unable to point out a single error in the judgment,” Chief Justice Asif Saeed Khan Khosa said of the petition to review last year’s ruling.

“We have to look at the value of the statements by witnesses, how can we hang someone on a false witness statement.”

The petition to review was not able to pinpoint any mistake in the verdict acquitting Bibi, the court said.

Drawn out ordeal
Even after her sentence was commuted, she was forced to remain in the same prison due to concerns over her safety. She has since been shuttled around the country from safe house to safe house to protect her from reprisals.
Under Pakistan’s penal code, the offense of blasphemy is punishable by death or life imprisonment.

Widely criticized by international human rights groups, the law has been used disproportionately against minority religious groups in the country and to go after journalists critical of the Pakistani religious establishment.
Bibi’s case attracted widespread outrage and support from Christians worldwide.

When her family met with Pope Francis in February at the Vatican, the Pontiff reportedly described Bibi as a “martyr,” according to Alessandro Mondeduro, president of the charity Aid to the Church in Need. Francis’ predecessor, Pope Benedict XVI, had also called for Bibi’s release.

In her 2012 book, “Get Me Out of Here,” Bibi included a letter to her family urging them not to “lose courage or faith in Jesus Christ.”

Life as a Christian in Pakistan 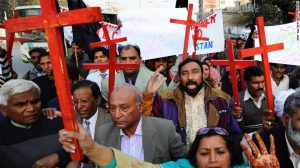 Members of the Pakistan Christian Democratic alliance march during a protest in Lahore on December 25, 2010, in support of Asia Bibi.

The vociferousness of Pakistan’s hardline Islamists, along with the blasphemy laws which activists say unfairly tackle religious minorities, make being a practicing Christian problematic in Pakistan.

Pakistan’s Christians make up only 1.59% of its population of more than 200 million, but according to Peter Jacob, the executive director for the Center for Social Justice in Lahore, the impact of blasphemy laws on minorities is hugely disproportionate.

The Center for Social Justice estimates 50% of those accused of blasphemy are non-Muslims.

While major militant-backed attacks on Christians have decreased, activists tell CNN that the main issue facing the community is systematic bias within Pakistani society.

School textbooks still rarely mention the achievements of minority Pakistanis, while in the province of Punjab members of the Christian community occupy most of the slums in the region. 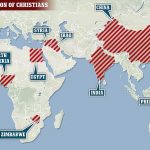 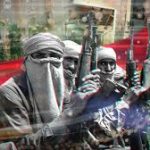