The lone protester stood in an affluent corner of Egypt’s capital on Sunday, nearly an hour’s drive from the downtown square where tens of thousands had massed in 2011 to denounce the country’s strongman leader in the heady days of the Arab Spring.

Though he had broadcast a plea on Twitter for others to join him, Ahmed Badawy had only a sign to accompany him this time, black marker on red poster. “No to amending the constitution,” he had written.

He was quickly arrested.

Egypt has another strongman now, President Abdel Fattah el-Sisi, who tightened his dictatorial grip this week when Egyptians approved a set of constitutional amendments that granted him expansive new powers over the judiciary and Parliament while allowing him to remain in office until 2030.

Not surprisingly for a vote that Mr. el-Sisi and his allies stage-managed from the beginning, the authorities said Tuesday, less than 24 hours after the polls closed, that the final count showed the amendments passed 89 percent to 11 percent, with a turnout of 44 percent.

The outcome of the three-day referendum crystallized what analysts say has become increasingly evident in recent years: Mr. el-Sisi, 64, is building a brand of authoritarianism that has not only demolished the democratic gains of the 2011 uprising, but surpasses the autocracy of Hosni Mubarak, the Egyptian leader who was forced from power during the revolt.

“It’s worse now than Mubarak,” said Elham Eidarous, an activist who belongs to the opposition Bread and Freedom party. “Anyone who talks about optimism is either lying or naïve, because there’s nothing optimistic about this situation.”

Ms. Eidarous said Mr. el-Sisi, like Mr. Mubarak, had justified repression and the silencing of critics by emphasizing the need to keep Egypt stable and safe from terrorists. Mr. el-Sisi has also pursued economic austerity measures, squeezing the poor and the middle class, that are reminiscent of ones Mr. Mubarak gradually introduced over his last 10 years in power.

But while Mr. Mubarak allowed some dissenting voices and independent media outlets, Mr. el-Sisi has moved to block any hint of criticism. He has jailed tens of thousands of opponents, shuttered news media outlets and all but shoved the opposition out of politics. Last year, he won re-election with 97 percent of the vote after eliminating all other serious candidates months in advance.

“It’s been true for several years now that the gains of 2011 have been lost,” said Michele Dunne, the director of the Middle East program at the Carnegie Endowment for International Peace in Washington. “But I think that this just makes it more and more clear to people.”

With the outcome never in doubt, the government and its allies were eager to lift turnout, the better to show that Egyptians were not merely in favor of the amendments, but enthusiastic.

Voters interviewed in working-class parts of Cairo said they had received free boxes of pantry basics like sugar and cooking oil. In some cases, voters said they were promised small amounts of cash for voting. One hotel, the Sonesta, advertised a raffle during the referendum: Vote, and you will be entered in a raffle to win a free trip to Mecca — a pilgrimage that all Muslims are supposed to make.

People were required to prove only that they had voted, not that they had voted yes, to receive such benefits. But driving around Cairo over three days of national voting, it was usually hard to tell that there were two sides to the ballot.

Banners draped over the streets — including some that the police had coerced shopkeepers into putting up — endorsed Mr. el-Sisi and the constitutional changes. Patriotic songs by well-known singers urged voters to the polls to “do the right thing,” and minibuses emblazoned with affirmative green check marks drove them there free.

Before and during the vote, the opposition was nowhere to be seen in the Egyptian news media. Opposition websites were blocked, and a scheduled protest against the amendments was canceled by the authorities.

“They don’t need to rig ballot boxes,” Timothy E. Kaldas, an analyst at the Washington-based Tahrir Institute for Middle East Policy, tweeted before the vote. “They rigged the entire media landscape.”

The State Information Service issued a statement on Saturday denouncing “shameful and enormous contradictions” in a report in El Mundo, a Spanish newspaper, that described apparent attempts to manipulate the vote.

On Tuesday, the agency celebrated “the integrity of the referendum procedures” and noted that voters had merely been encouraged to vote, not to vote a certain way. Criticism of the amendments in the media, the agency said, were “worthless false readings.”

Nevertheless, opposition leaders urged the government’s demoralized critics to vote against rather than boycott the referendum, and some Egyptians posted on social media announcing their “no” votes.

But for staunch el-Sisi supporters, of which there seem to be a sizable number across Egypt, voting yes did not take much convincing. They see Mr. el-Sisi as a bulwark against terrorism, a friend to Egypt’s Christian minority and an economic reformer.

“When he first became president, the country was falling apart, but he’s done a lot of good things,” said Alaa Abdel Mohsen, a woman who voted in the upscale Cairo suburb of Heliopolis on Sunday evening. “He has to stay and finish his projects.”

The constitutional amendments will further concentrate power in Mr. el-Sisi’s hands, extending his current presidential term to six years from four and allowing him to run for another six-year term in 2024. If he wins the next election, he could rule for a total of 17 years, and analysts speculate that he is setting himself up to rule for much longer.

The amendments also give him greater influence over the country’s Parliament and judiciary by conferring the power to appoint top judicial officials and a large chunk of a new house of Parliament, changes that analysts said threatened Egypt’s separation of powers.

Mr. el-Sisi, a former general, came to power in a military coup against the country’s democratically elected president, Mohamed Morsi, in 2013, amid huge protests against Mr. Morsi’s leadership. (Mr. Morsi, too, had sought and won a referendum on constitutional amendments that critics said unfairly favored his side.) Now, under the latest round of changes, the military will gain more sway in government and politics as the appointed “guardian and protector” of the Constitution.

The amendments amount to a reversal of Mr. el-Sisi’s public pledge in 2017 not to seek an extension of his term. His move to extend his stay in office made Mohammad Noaman, 27, uncomfortable enough to vote against the amendments, though he supported some of the other changes.

“I’d prefer democratic transitions every four years,” said Mr. Noaman, an accountant who was in line at a busy polling station in Nasr City on Sunday.

Mr. el-Sisi’s supporters started to discuss the idea of these constitutional changes after his re-election last year, and the changes were formally introduced in early February before being discussed in national dialogue sessions that mostly involved handpicked supporters.

The package passed Parliament with only a handful of opposing votes last week, just three days before the referendum began.

It is not clear why the amendments were pushed through so quickly. Ms. Dunne said some analysts believed Mr. el-Sisi wanted to make changes before his popularity took a further hit from the economic hardships many Egyptians are feeling, or that he was capitalizing on favorable signals from the White House, where President Trump recently hosted Mr. el-Sisi for a friendly visit.

“I don’t know about the effort,” Mr. Trump said during the two presidents’ meeting when asked about the constitutional amendments. “I can just tell you he is doing a great job.”

Top photo: An Egyptian soldier and a policeman standing guard outside a Cairo polling station on Monday. Posters all over the city endorse Mr. el-Sisi’s plans.CreditKhaled Desouki/Agence France-Presse — Getty Images 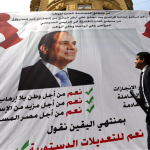 In Egypt Referendum, Only the Turnout Seems in DoubtNews & Reports 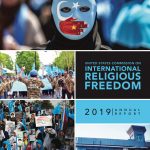