Egypt’s jail population has swelled. New prisoners include a Lebanese tourist who complained about Egypt on Facebook; a democracy activist who spoke out about sexual harassment; and a visiting grad student from an American university who was arrested as he researched the judiciary.

The State Department’s take on Egypt’s human rights progress? A thumbs up.

This week, Secretary of State Mike Pompeo lifted restrictions on $195 million in military aid that was frozen last year to protest Egypt’s dire human rights record and its relationship with North Korea, a State Department official said. The aid had been reinstated in response to steps taken by Egypt on specific U.S. concerns, the official said, without specifying what they were.

Human rights groups slammed Mr. Pompeo’s decision, saying he had squandered valuable leverage over President Abdel Fattah el-Sisi at a time when his human rights record seems to be only getting worse.

American officials say they withheld the $195 million in aid to press Egypt over a narrow set of issues. The Trump administration wants Mr. Sisi to overturn the 2013 conviction of 43 employees of international groups that promote democracy, including 17 American citizens.

And it wants Mr. Sisi to rescind a draconian law regulating aid agencies that he signed last year, which could make it virtually impossible for many international aid groups to work in Egypt.

But those demands were made in private, and experts said it was unclear how much the Egyptians had conceded. It seems probable that Mr. Sisi will seize on the resumption of aid as a validation of his actions so far, and perhaps will feel emboldened to step up his repression.

“It’s highly debatable whether Egypt has fully met any one of those conditions,” said Andrew Miller of the Project on Middle East Democracy. “But the Egyptians will present this decision as an American blessing of their policies.”

The aid decision reflects the new tenor of American foreign policy under Mr. Pompeo and the national security adviser, John R. Bolton, who have shown a willingness to trade American leadership on human rights for an embrace of friendly autocrats like Mr. Sisi who share their hostility toward political Islam.

Mr. Sisi has long enjoyed a warm relationship with President Trump, who hailed the Egyptian leader as a “fantastic guy” and even publicly complimented his taste in shoes. But the Egyptian leader had a tougher time from the previous secretary of state, Rex W. Tillerson, who last August denied Egypt $96 million in aid and suspended $195 million.

Egyptian officials were shocked at the rebuke from the United States, which over the past 40 years has given Egypt $47 billion in military aid and $24 billion in economic assistance. Mr. Tillerson was said to be angry that Mr. Sisi had broken a private promise, made in Washington, that he would not sign the harsh law on aid agency regulations. In May 2017, Mr. Sisi went ahead and enacted the law anyway.

Mr. Tillerson also sought to press Egypt over its relationship with North Korea, which operates a large embassy in Cairo that it uses to carry out illicit arms sales across the Middle East, according to United Nations inspectors.

Mr. Sisi’s government has partly addressed some American concerns. A retrial of the case involving the 43 foreign aid workers, many of whom were convicted in absentia, is scheduled to start this year. Egyptian media reports say that Mr. Sisi has forced North Korea to cut the number of diplomats stationed at its embassy in Cairo.

But such restrictions can be easily circumvented through the use of accounting measures, like counting diplomats as spouses, said Mr. Miller, the analyst, who worked on Egypt at the State Department until last year. “If past is prologue, we will see that as soon as the U.S. looks the other way, the Egyptians will start up their relationship with North Korea again,” he said.

On most other fronts, things have gotten markedly worse in Egypt. Since Mr. Sisi’s re-election in May, after a carefully managed vote, the president has redoubled his efforts to lock up even relatively mild critics.

Sami Anan, a former army chief who was thrown in jail when he dared to stand against Mr. Sisi for election in April, recently suffered a stroke that has incapacitated him, a close relative said in an interview.

Shady el-Ghazaly Harb, a surgeon and activist who was imprisoned in May for critical comments he made against Mr. Sisi on social media, is being held in solitary confinement, his wife, Fatma Mourad, said in an interview. “Shady thinks that Sisi wants to punish him,” she said.

Even tourists are not safe. This month a Lebanese woman, Mona el-Mazbouh, was arrested after releasing a 10-minute video in which she complained, in lurid terms, about being sexually harassed on the streets of Cairo. A court convicted her of spreading rumors and sentenced her to eight years in prison. An appeal is scheduled to be heard on July 29.

Critics say Egypt squanders much of the military aid it receives, splurging on expensive tanks and warplanes rather than on less glamorous, but more useful, counterinsurgency training for its army.

But others argue that full American engagement is essential to help Mr. Sisi combat the Islamist extremists based in Sinai who carried out numerous bombings of churches and mosques across Egypt last year.

“Egypt cannot be simply ignored by the United States,” Samuel Tadros of the Hudson Institute’s Center for Religious Freedom said at a congressional hearing this week.

“Abandonment is not a strategy nor will imaginary solutions of cutting U.S. aid result in Egypt’s transformation into a liberal democracy,” Mr. Tadros said. 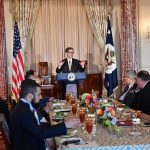