For Samia Morkous and her family, the trip to a Coptic Christian monastery was meant as a pilgrimage of gratitude for her husband’s recovery from lung surgery. Then Islamic State gunmen ambushed the tour bus south of Cairo.

Her son, Sameh, opened the door of the small bus and then recoiled and fell back from shots to his head, said Mrs. Morkous. Several gunmen boarded the bus and demanded that the occupants recite the Muslim creed.

Those who refused—or who answered with Christian hymns—were immediately killed, Mrs. Morkous said at a Cairo hospital where she is recovering from bullet wounds to her thighs suffered in the Friday attack.

When it was over, Mrs. Morkous’s husband, Mohsen; two adult sons; a teenage grandson; a four-year-old granddaughter; and two other relatives were among 30 people killed.

“We came to get blessings and rejoice with our children,” Mrs. Morkous, who lives in Tinley Park, Ill., said of the trip to the ancient St. Samuel Monastery.

“It was like the world flipped upside down around us,” she said of the attack.

The couple were on their first trip to Egypt in nearly two years, after immigrating to the U.S. several years ago.

The ambush in Minya province, about 190 miles south of Cairo, was the deadliest terrorist attack ever on Egypt’s Coptic Christian minority. It marked the latest in a series of Islamic State attacks on Copts since December, including three bombings of Coptic churches that killed 70 people.

Egyptian President Abdel Fattah Al Sisi, facing increasing criticism from Copts who say he has failed to protect them, ordered rare cross-border airstrikes on militant camps in Libya in the wake of the attack.

The strikes were aimed at the Libyan city of Derna. Forces headed by a Sisi ally, Gen. Khalifa Haftar, say the city is home to armed groups linked to al Qaeda, but not Islamic State, which was driven out in 2015.

On Tuesday, the Libyan National Army said it had set up an operations room to coordinate airstrikes with Egypt. Spokesmen for both militaries declined to give more detail on the arrangement, including whether Egypt had launched any additional airstrikes after the initial round.

A spokesman for Mr. Sisi also didn’t respond to messages and calls seeking comment. Mr. Sisi, in a televised speech following the Friday attack, said the gunmen had trained in unspecified militant camps in Libya.

Visitors to Mrs. Morkous’s hospital room kissed her hand, asking for her blessings and offering condolences. They told her that her family members were in a better place and marveled at an interview she gave to a local television station in which she said she is praying for the murderers.

She recalled the attack in a low voice and short sentences punctuated by deep breaths. “There was heavy gunfire,” she said.

In an effort to save a relative who had a gun pointed at him, Mrs. Morkous said she removed her gold jewelry and handed it to a gunman. He shot her family member anyway.

“May the Lord forgive them,” she said.

A family friend, Samuel Mokhtar, said Mrs. Morkous will return to the U.S. only if her daughters-in-law whose husbands were killed and her grandchildren who lost their fathers accompany her.

“She won’t leave them behind,” he said.

By Dahlia Kholaif from Cairo. Tamer El-Ghobashy and Shibani Mahtani contributed to this article.

Photo: Mohsen and Samia Morkous, who immigrated to the U.S. several years ago, in an undated snapshot. Mr. Morkous was killed when ISIS gunmen attacked a bus they were travelling in south of Cairo last week. Mrs. Morkous survived. PHOTO: PHOTO FROM FATHER SAMUEL AZMY 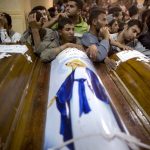 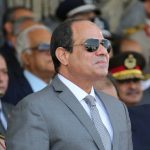